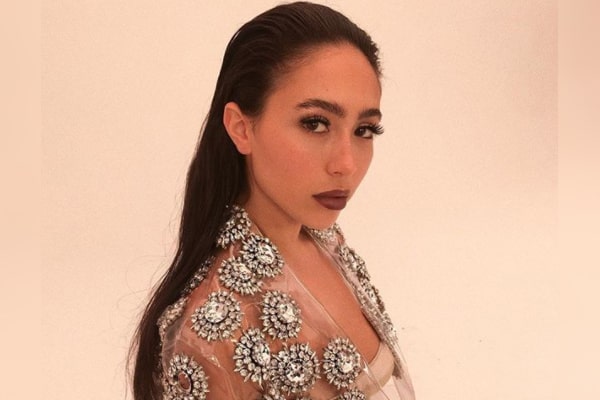 Rick Salomon is an American poker player who rose to fame after the adult tape he filmed with Paris Hilton was released in 2004. Best known for his high-profile relationships with female entertainment tycoons, including his baby mama, Elizabeth Daily, Pamela Anderson, etc. Salomon made millions of dollars from $2.8 to $3.3 million in the Big One for One Drop event.

Rick Salomon’s daughter, Tyson Daily Salomon, is an aspiring singer who has been waiting for her break in the music. The endearing and down to earth personality, Tyson is not an alien to the entertainment world, specifically the musical. Since she is surrounded by singer mother, Elizabeth, and sister, Hunter, she is well accustomed to music and grew up looking forward to it.

Furthermore, the bold and unapologetic 21-year-old Tyson has released several singles, including Merry Go, Blurry, Back For More, etc. Rick Salomon’s kid, Tyson Daily, has a unique taste of MVs and delivers it in a charismatic manner. Moreover, her lyrics are related to the youth’s daily experiences and an authentic representation of who she is.

Salomon’s Music Are Representation Of Herself

According to Tyson Daily Salomon’s interview with Galoremag, she revealed that her songs are personal and express herself. Rick Salomon’s daughter describes her music as motional, powerful, fun.

Tyson’s song, ‘Blur,’ is about her partying a lot as it is built into an unhealthy habit. She sang the song to kind of tribute the young woman and her experience as a party gal. Furthermore, she revealed that she had learned from her past and console her younger self.

Besides being a party gal, Tyson seems to be soft-hearted and has high expectations from a relationship. She wrote another song, ‘Merry Go,’ about the highs-and-lows of a relationship. She revealed that the music is most personal to her as she shares in hopes of being vulnerable and talking about that’s relatable to numerous people.

Rick Salomon’s daughter, Tyson, is very confident and knows her goals. Hence, she looks forward to growing both personally and professionally in the coming days. Let’s hope she achieves her goals soon.

Aforementioned, Rick Salomon is famous for having relationships with female celebrities. That includes his short marriage with actress Elizabeth Daily which resulted in two gorgeous daughters, Tyson being the youngest.

The former couple welcomed Tyson on October 14, 1998. Born to the famous couple, she grew up surrounded by famous faces and musical interests. Furthermore, she grew up with her sister, Hunter Daily Salomon, who is only two years older. The sister-duo is jaw-droppingly beautiful.

The combination of blonde and brunette siblings grew up to become a powerful sibling/singing duo. They are inseparable and still make magic together. Tyson and Hunter even have an Instagram account that is about their sibling love.

Unfortunately, Tyson Daily Salomon’s parents divorced in 2000 after five years of marriage. So, Salomon sisters could have found solace in one another’s presence to cope with the difficult separation. Conclusively, Tyson and Hunter are mighty together.

When something terrible happens, the natural response of a person is panic. However, Rick Salomon decided to pinch every penny out of the disdain when a sex tape featuring him and then-girlfriend, Paris Hilton, was leaked.

In 2003, Tyson Daily Salomon’s father, Rick, filed a lawsuit against the company that distributed the tape and against the Hilton family, accusing them of tarnishing his reputation. Salomon further accused them of trying to discourage media outlets from playing excerpts of the video claiming Hilton was underage.

Salomon and Red Light agreed to pay Hilton $400,000 plus a percentage of the tape’s sale profit as he dropped the lawsuit against the Hilton family. Bizarre but cunning.

Hunter Daily Salomon’s sister, Tyson’s Instagram is full of her performance dates, glamorous pictures, sibling dates, and lover. She has been in a committed relationship with LA-based photographer and director, Austin Williams Simkins for quite a while.

Tyson Salomon’s boyfriend also serves as her vocal producer and creative director. They flaunt their love on Instagram but not in a typical manner and lovely captions. Let’s hope the couple last long and achieves success together.

The name Tyson means Firebrand Or Son Of Denis and is of English origin.