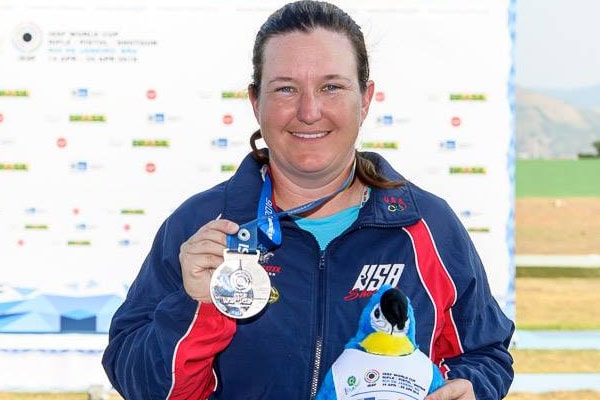 Kim Rhode accumulates maximum percentage of her wealth from her career as a skeet shooter. Image Source: Kim Rhode's Facebook.

California-native Kim Rhode is a renowned American double trap and skeet shooter, having won numerous medals and titles to date. The successful female shooter is not just gaining massive fame but also bagging several dollars from her decorated career.

So, without any delay, let’s find out how much is Kim Rhode’s net worth and how she accumulates a hefty sum of money from her career as a professional shooter.

Kim Rhode Net Worth And Earnings

The Whittier, California-born Kim Rhode started sport hunting by the age of 12, traveling on African safaris with her dad, Richard Rhode. However, she had already begun competing in skeet at age 10. Rhode obtained her first world championship title in women’s double trap shooting at age 13.

However, the double trap shooting was eliminated from the 2008 Summer Olympics, and ever since then, her focus has been on skeet.

To date, Kim Rhode has won a total of six Olympic medals and five medals at the World Championships. Along with medals and fame, she has also deposited a big sum of money into her bank account.

Celebrity Net Worth notes that Kim Rhode’s net worth is nearly $2 million, which she amassed mainly from her career as an Olympian. However, she also earns a considerable sum from other sources.

So, here, let’s be familiar with how Rhode adds such a hefty amount to her net worth and her other earning sources.

Earnings From Her Career As A Skeet Shooter

Aforementioned, Kim Rhode is a winner of six Olympic medals, including three gold medals, two bronze, and a silver. She earned her first gold medal as a skeet shooter at the 1996 Summer Olympics. Similarly, in the 2000 Summer Olympics, Rhode succeeded in receiving a bronze medal.

Moreover, she scooped her second and third gold medals in the 2004 and 2012 Summer Olympics, respectively. Rhode had taken home her only Olympic silver medal to date, in the 2008 Olympics.

According to CNBC, various countries, including the United States, pay Olympians a decent amount of money for bringing home Olympic medals. For example, Olympians for Team USA receive $37,500 for each gold medal they win, while Singaporean athletes receive $737K. Similarly, if Team USA athletes come away with bronze and silver Olympic medals, they get $15,000 and $22,500 respectively for each medal.

So, Kim Rhode might have received a similar amount as her monetary reward for winning six different Olympic medals for Team USA. On top of that, she added a substantial amount of money competing and winning in many other national and international tournaments.

Furthermore, the shooter also pockets some cash as a coach to new shooters, who are gradually finding success like her. Therefore, Kim Rhode’s net worth must have seen considerable growth in recent years.

Income From Sponsorships And Endorsements

Like many other athletes worldwide, Kim Rhode also has tons of high-profile sponsorships and endorsement deals. For that reason, she rakes in lots of money from her sponsors. As mentioned by Rhode on her webpage and other social networking handles, her sponsors include Winchester Ammunition, Beretta USA, Truck Vault, RE Ranger, Promatic Traps, and many more.

As reported by NBC Philadelphia in August 2021, the exact values of Olympics sponsorships are usually hidden from the public. But a famed athlete who dominates headlines and Olympic ads receives millions from their sponsors. So, as a renowned Olympian, Kim Rhode might be drawing in a solid amount from her sponsors at the moment and giving rise to her net worth.

Besides, Kim Rhode also earns ‘wages’ for competing in the form of stipends. Also, like other American athletes, she might receive funds from her nation to cover her training and competition expenses.

Besides the above-mentioned sources, Kim Rhode added some dollars to her total net value as one of the hosts of the Outdoor Channel’s TV program ‘Step Outside.’ She co-hosted the program’s second season alongside Tom Gresham.

Moreover, Kim Rhode’s other source of income could be her YouTube channel, which she created in April 2013. However, she has uploaded only one video on her channel to date. As a result, Rhode’s YouTube channel has a few subscribers and does not draw in any revenue at the moment. However, we hope she will begin uploading videos on it shortly and making some money from it too.

According to ESPN, someone stole Kim Rhode’s competition shotgun from her pickup on 11 September 2008, which she used in competition for eighteen years. It further reported that Rhode had even offered a $5,000 reward for returning her shotgun, which was valued at between $20,000 and $35,000. But, luckily, she reunited with it in January 2009 after police found it during a search of a parolee’s home.

While Kim Rhode’s gun, which she calls ‘Old Faithful,’ was still missing, her fans chipped in to buy her a new $13,000 Perazzi. She cried on stage when her fans gave the new gun to her in a surprise presentation at Cal Poly-Pomona. Since then, Rhode began using the donated gun and carefully locked her old gun away in a safe.

So, Kim Rhode’s successful career in the American sports industry as a legendary female skeet shooter has blessed her with millions of well-wishers. Along with that, her career also helped her to be a millionaire with a net worth of around $2 million.

Hopefully, Rhode’s wealth will increase in the upcoming days so that she can pay all her insurance premiums and the taxes of her valuable assets in time and with ease, along with giving her family a rich life.