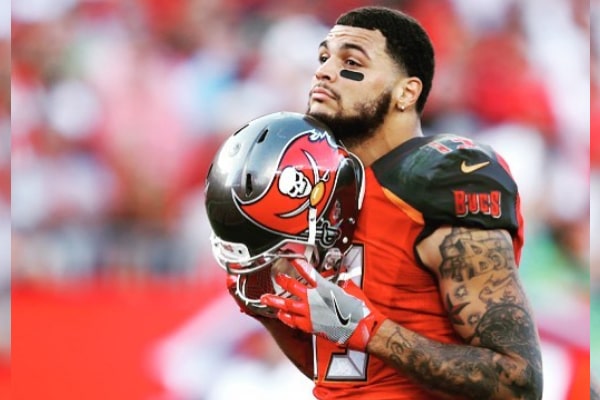 Mike Evans' Net Worth is significantly high since his draft in 2014. Image Source: Mike Evans' Instagram.

NFL star Mike Evans has made impressive records as an American football wide receiver for the Tampa Bay Buccaneers. The 27-year-old wide receiver won his first Super Bowl championship on February 7, 2021, a 31-9 victory over the Kansas City Chiefs.

Therefore, let’s scrutinize Mike Evans’ net worth and earnings from his NFL career.

Aforementioned, wide receiver Mike Evans’ remarkable career since his draft in 2014 is beyond amazing. Moreover, he managed to bag his first victory over Kansas City Chiefs in early 2021 and made headlines.

With increasing recognition and skillful demonstrations, Evans’ worth has increased significantly. Summing up, Mike Evans’s net worth is estimated at $25 million, which is magnificently aided by his earnings as an NFL athlete.

Thus, let’s breakdown Mike Evans’ earnings and his salary throughout the years.

NFL wide receiver Mike Evans is with the Buccaneers since his draft in 2014. His first contract with the Buccaneers lasted until 2018 with a guaranteed $14,631,502 at signing. Evans also received an $8,961,092 signing bonus which aided in his increasing earnings.

Mike Evans’s impressive performances during his six-year tenure in Buccaneers were fruitful, both in terms of his stats and earnings. He broke the franchise record for receiving yards in a playoff game, winning over Washington Football Team.

With the base salary of $12,250,000, Mike Evans’ net worth is bound to increase rapidly. Although Evans’ salary saw a significant raise, he was ready to pitch in to help his team retain several important free agents.

If you noticed the table above, you might have noted the empty cap space in 2021. Yes, Evans willingly came forth offering Buccaneers the cap relief.

According to SI, 31 Tampa Bay players are set to become free agents this off-season, including edge rushers Shaquil Barrett, wide receiver Chris Godwin, Antonio Brown, running back Lavonte David, among others. Furthermore, the Bucs aren’t in salary cap trouble by any means, but the freshest projection sets the Bucs around $38 million to spend.

Thus, Mike Evans’ potential pay cut might aid a considerable benefit. Previously mentioned, a five-year contract extension signed by Mike was to account for $16.6 million against the cap in 2021 and over $18 million in each of the following two seasons.

The #Bucs have done a simple restructure on star WR Mike Evans’ contract, creating $3.2 million in 2019 cap space. He’s still due $20 million cash this year. They previously restructured in March, too, but only this one for cap reasons.

According to Tom Pelissero, Mike Evans’ modified contract saved the Bucs around $3.2 million in cap space. Despite the pay cut, Evans enjoys a lavish lifestyle in Tampa with his wife, Ashli Dotson, and three kids.

An Impressive $1.2 Million Home In Tampa

Despite the cap relief, Mike Evans’ earnings are still impressive, and he can afford a lavish lifestyle. According to Realtor, in the 2014 NFL draft, Evans purchased a $1.2 million home in Tampa. Honestly, the home’s price tag is relatively modest for his fortune, but Evams’ house has the smell of love and is an absolute definition of delicacy.

Thus, the magnificent growth in Mike Evans’ net worth allows him to live a comfortable life with his wife, Ashli Dotson, and his three kids. Furthermore, Evans’ Instagram does not include much of his trips or family vacations, but they sure can afford some lavish life.

Started A Foundation To Help Victims Of Domestic Violence

Mike not just earns but also gives back to society. His fans are already aware of the domestic violence he and his mother experienced as a child. Thus, Mike and his wife, Ashli, founded the Mike Evans Family Foundation in December 2017 to help domestic violence victims.

The foundation has also hosted free football camps for children and aids in educational development. Evans further admitted that he wanted to start a foundation for a while and help impoverished kids by providing them education-fund.

Moreover, Mike Evans also donated a whopping $100,000 donation for COVID-19 relief efforts, with $50,000 going to United Way Suncoast to support the Tampa Bay region. Well, Evans’ voluntary works and his earning helps him live a satisfying lifestyle. Therefore, let’s hope Evans’ wealth continues to double in the following years as he goes on setting new records for the Bucs.