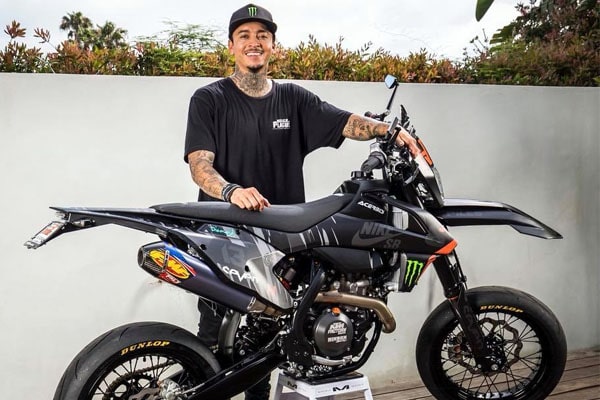 Nyjah Huston's net worth has helped him to fulfill his dream of buying and riding latest dirt bikes. Image Source: Facebook/ Nyjah Huston.

Some decades ago, Skateboarding was seen as a pastime for kids to kill their boredom. However, after the development of the polyurethane wheel in the 1970s, it began to really take up as one of the most-loved sports. Lately, many people have ridden their skateboards to fame as well as fortune. There are numerous skaters worldwide who are worth multi-million dollars which they amassed from their career in skateboarding. Nyjah Huston is also one of these numerous fortunate skaters.

According to Celebrity Net Worth, Nyjah Huston’s net worth is estimated to be $12 million, making him one of the richest skateboarders globally. So, how did this award-winning skateboarder managed to bag such a hefty amount to his total assets? Find it out all here.

Nyjah Huston Net Worth And Earnings

Nyjah Huston is reportedly the highest-paid skateboarder worldwide at the moment. He started skating when he was a toddler. His dad, whom he says was quite controlling, encouraged him to skateboard and always made sure he practiced it every single day from the tender age of five. On top of that, after his mom and dad purchased an indoor skatepark, Huston spent most of his waking hours skateboarding.

ALSO READ: Charles Stanley’s Net Worth And His Earning Sources

With his constant dedication and hard work, Nyjah Huston has finally succeeded in gaining fame globally and nabbing millions of dollars participating in various events. Coming to 2021, Nyjah Huston’s net worth is over $12 million, which he has amassed mainly from his career as a skateboarder. So, how did he became able to earn such a massive amount? Know Nyjah Huston’s earnings from his different ventures down here.

Earnings From His Career As A Skateboarder

Aforementioned, Nyjah Huston started playing skateboard in his childhood days with the constant motivation and support from his parents. He first rose to fame after signing a sponsorship deal with Element Skateboards and joining their team. During his beginning years with Element, Nyjah performed in numerous Element video productions and participated in high-profile contests. He stayed connected with the company only till 2008 when he was an amateur skateboarder.

Nyjah Huston founded his own skateboard deck company named I&I in 2009, which only existed for two years. So, he rejoined Element and released a single video production titled Rise & Shine in 2011. It was available on iTunes for purchase. Since then, Huston has released a number of videos and taken part in various contests winning several dollars in cash prizes and medals.

Nyjah, the record youngest X-Games competitor since the age of 11, has won back-to-back Street League championships, including the Supercrown and inaugural crown. Nyjah won a gold medal for the first time at the 2013 X Games Street League contest in Barcelona, Spain.

Along with the medal, reportedly, he earned more career cash prizes than any other skaters in pro-skateboarding history. However, the amount is not released to the public to date. Normally, the winner of SLS events gets an amount ranging from $150K to $250K. So, Huston also might have received similar prize money.

Besides, Nyjah Huston has won a total of seven gold medals at various Summer X games and won various skateboarding tournaments to date. And each of his victories has won him a big amount of prize money, aiding in his rising net worth.

Income From His Newest Capsule Collection

As Nyjah Huston prepares for Tokyo Olympics 2021, he has released a really cool capsule collection for the brand ‘Privé Revaux Eyewear.’ Privé Revaux is a brand co-founded by Jamie Foxx, Ashley Benson, and Hailee Steinfeld. Huston launched the collection to stay productive along with doing his main job, i.e., skating.

While talking to the People magazine, Nyjah Huston remembered seeing the brand ‘Privé Revaux’ for the first time, worn by Jamie Foxx, and hearing that Foxx was one of its founders. So, he met the owner, David Schottenstein, and partnered on the Prive Revaux’s collection. Some of the Nyjah Huston collections by Privé Revaux Eyewear, along with their prices, are as below.

The award-winning skater Nyjah Huston usually does not skate with glasses on because there are high chances of the glasses falling off and breaking. Keeping that in mind, Huston designed a special frame with HoldTight technology. The tech uses magnets into the arms of the glasses, which allows the frame to snap and lock closed, preventing the glass from falling off. Huston is the first person to use the technology in the Prive Revaux collection.

So, Nyjah is earning a substantial sum of money from the selling of his eyewear collections by Prive Revaux.

A household name to every fan of action sport, Nyjah Huston’s fame and fortune has seen no shortage in sponsorships ever since he started skateboarding. His first sponsor was Element Skateboards at the age of Seven. Some years later, the DC Shoes added up to the list for his shoe sponsor. Reportedly, the purchase of shoes from the skate shop increased after DC Shoes sponsored Huston.

Furthermore, as soon as Nyjah Huston got on the Nike team, he got his own signature Nike shoe. The new Nike SB ‘Nyjah’ shoe, which costs $95, is flexible and stands up to relentless use. Its inner sleeve keeps your foot locked in and connected while it’s skateboarding-specific. Moreover, the free sole of the Nike SB Nyjah Free 2 shoe expands and contrasts with every push making it comfortable for the person who uses it.

Besides earning from various skateboarding contests, Nyjah Huston’s earnings credits go to various other sources. He models for various companies as well as gets features in numerous movies.

Nyjah Huston’s net worth has given him almost all the luxuries and lavish lifestyle that he deserves for his hard work and the risks he takes as a skateboarder. With his fortune, he is able to fulfill his wants for the latest dirt bikes and desire for charity works.

Moreover, Huston uses branded shoes for his ease while skateboarding and lives in a luxurious home in Laguna Beach. Nyjah purchased his 5,300-sq.ft place in 2018 for $3.6 million. In December 2019, he had even given Architectural Digest a video tour of his home.

Before moving to Laguna Beach, Nyjah Huston had a house in San Juan Capistrano. He bought it in 2013 for $2.55 million. Nyjah’s previous million dollars worth of property sat on three acres of land and featured over 6,000 sq. ft. of living space. Additional attractions were an infinity pool and expansive courtyards. But, in 2018, he reportedly sold his San Juan Capistrano property for $3.2 million.

Currently, the young millionaire enjoys his lavish life in Laguna Beach, California, and is preparing for the upcoming Tokyo Olympics. Hopefully, he will win the Tokyo Summer Olympics 2021’s gold medal. Moreover, his side businesses are also with him to keep him adding thousands of dollars on his rising net worth.