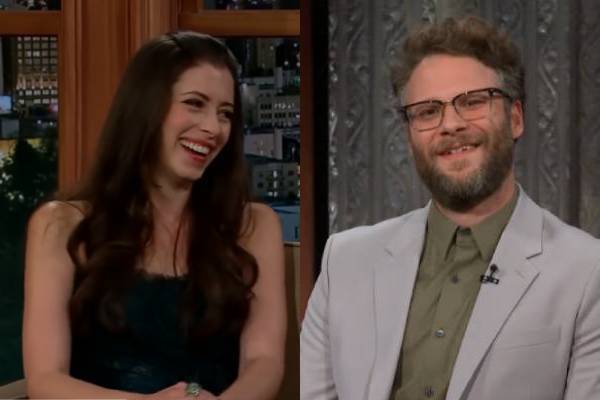 Seth Rogen and Lauren Miller Rogen are Hollywood power couple who have a big fortune to their names. Image Source: Social Media.

Born Seth Aaron Rogen, Seth Rogen is a renowned actor, comedian, and filmmaker of Canadian nationality. He is one of the leading actors who has starred in several top-rated movies. At the same time, the star is married to Lauren Miller Rogen, a well-known actress of American nationality.

With their rocking career in the entertainment industry, the husband-wife duo has amassed a vast sum of fortune to their name. Thus in today’s article, let’s see how the pair are earning an enormous sum of money and who is richer among the partners.

Seth Rogen Net Worth And Earnings

The talented comedian has been active in the film industry for over two decades. Throughout the years, he has acted in over 100 movies and produced several films and TV series. Thus, he seems to have accumulated quite a lot of money in his career.

As per Celebrity Net Worth, Seth Rogen’s net worth is $80 million. Rogen’s primary source of income is his job as an actor and producer. So, let’s further break down and explore his earning sources.

Also Read: Master P’s son, Lil Romeo’s Net Worth – Find Out If He is As Rich As His Dad

Seth shot up to prominence after playing one of the main character’s best friends in the movie, The 40-Year-Old Virgin, in 2005. However, he began acting in 1999 with Freaks and Geeks. In 2007, Rogen gained wider attention after starring in Knocked Up as a leading character. The movie was a huge hit that grossed $219 million at the box office.

Eventually, the talented personality’s movies continued to gain commercial success, and he became one of the most accomplished actors and producers in the American entertainment industry. Some of his hit movies are listed below, along with their box office collections.

Considering the financial success of his movies, we can see how the actor amassed such an immense fortune to his name. Also, he was reportedly paid $8.4 million for his performance in The Interview. In addition, he has done several voice acting, which must have also benefited Seth Rogen’s net worth.

Earnings As A Producer

Apart from acting and lending his voice, Rogen is also a producer and co-writer of numerous films and television series. Some of the notable works he produced include Invincible, The Boys, Pam & Tommy, etc. Additionally, these projects have also garnered enormous success. Let’s take a glance at the table below to see how much Rogen’s produced movies have collected at the box office.

As it is evident that the star’s movies are a massive commercial success, he must have got his fair share too. Thus, Seth Rogen’s net worth being $80 million, is no surprise and totally deserving. Let’s hope he continues to accumulate more riches in the coming days.

As mentioned earlier, Seth Rogen’s wife is also an accomplished actress. She began her career in 2007 with the movie Superbad. Lauren’s debut film gained enormous success and collected $170,812,526 at the box office. Afterward, she starred in many other top-rated movies like Phobias, Like Father, For a Good Time, Call…, etc. Hence, Lauren Miller’s net worth is heavily influenced by her acting career.

Additionally, the talented actress’ salary is boosted by her performances in numerous short movies, TV series, and TV movies. Thanks to her multiple ventures, Lauren Miller Rogen’s net worth is estimated to be $2 million.

Besides, Lauren also has some producing, directing, cinematography, second unit directing, and script-writing credits. As she is still active in her career, her fortune will undoubtedly continue to increase in the future.

The Rogen pair has been married since 2011 and are blissfully together. Lauren and her husband enjoy lavish lives thanks to their massive net worth. For instance, the couple has spent $11 million on an 8+ acre compound in Hollywood Hills. They previously bought the first part of the Hills compound together in December 2014 for $8 million.

Furthermore, in July 2020, the duo purchased a property of 1 acre for $3 million. Besides, Lauren Miller Rogen’s husband has several other properties to his name. In 2012, he bought a $1.1 million worth house in West Hollywood which he sold in 2020 for $1.7 million.

Nonetheless, we can see Seth Rogen is richer than his wife, Lauren. However, they are a couple. So, it does not matter who is wealthier; their net worth will benefit both. Hopefully, the Rogen couple will continue earning more fortune and spend their life happily together.