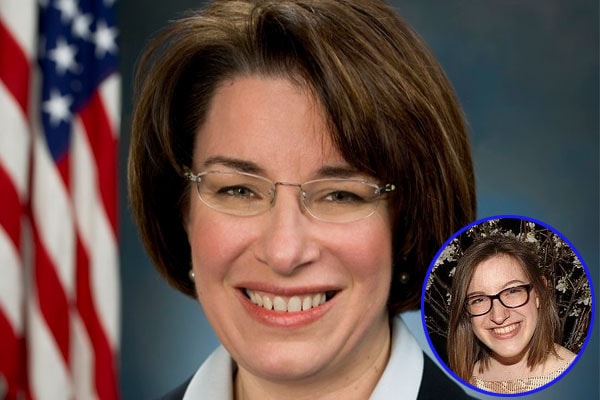 The American lawyer and politician, Amy Klobuchar‘s daughter Abigail Klobuchar Bessler was born in 1995. She is the only child Amy shares with her husband, John Bessler with whom she has been married since 1993.

Abigail Klobuchar has got a friendly nature who doesn’t hesitate to share her views in front of the public. Recently, she came into limelight when she appeared on WCCO-TV expressing her proudness towards her mother for the presidential election 2020. It’s her mother’s great lead and inspiration that Abigail has got special confidence to meet people.

Abigail’s mother, Amy Klobuchar serves as the senior United States Senator from Minnesota. She is currently on the campaign run for the Presidential Election, 2020 in which her daughter Abigail equally supports her lead. Abigail said that she would help her mother any way she can and is ready for the National spotlight. Abigail’s mother is the first woman who has ever been selected for the senator from Minnesota, and she can’t wait to extend her profile to be the future President of the United States.

It is no wonder how Abigail shows her curiosity for politics. Her grandfather, Jim Klobuchar is an American journalist and has written for the Star Tribune in Minneapolis for three decades. She said that her mother’s capability to take the lead has been inspired by granddad and she has been inspired each day along with her journey with mom.

Abigail Kloubchar Gets To Meet People Through Her Mother

Abigail has got a friendly nature. She doesn’t seem disturbed with media attention and on every occasion, she is well aware of what to speak and how to act. It looks like she has got the same quality as her mother. Since she is Amy Klobuchar daughter, Abigail gets lots of opportunities to meet new people and some of the world’s great leader which isn’t easily available for all. Abigail had the great honor meeting the former president Barack Obama.

The name Abigail has a Hebrew origin meaning father’s joy.