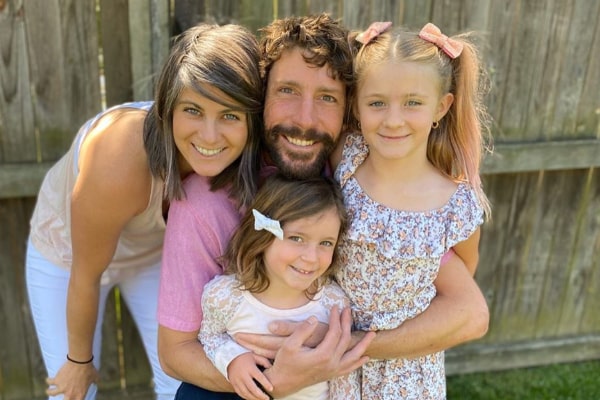 Travis Pastrana is a great dad to Addy Pastrana who is excited about sports like her parents. Image Source: Lyn-Z's Facebook.

Travis Pastrana is an accomplished American stunt performer and motorsports competitor. He has managed to bag several championships and X Games gold medals.

The 36-year-old professional motorsports competitor has achieved a successful career and has a happy family at a young age. Married to a professional skateboarder, Lyn-Z Adams Hawkins, in 2011, the couple shares two beautiful daughters. Here, we will be talking about Travis Pastrana’s eldest girl, Addy Pastrana.

Grid your loins as you are about to witness one of the most zestful and vibrant kids ever. It would not come off as a surprise, but the athletic parents, Travis Pastrana and his wife, Lyn-Z Adams Hawkins, welcomed their first child, Addy Pastrana, on September 2, 2013.

The couple notified the birth of their first child via social media in September 2013.

Although Pastrana’s daughter is only six years old, she is a powerhouse and is indulged in different outdoor activities. In an Instagram post, Travis posted a picture of his wife, Lyn-Z and daughter, Addy biking captioning, ‘Like mother, like daughter.’

But in all seriousness, Pastrana’s daughter is very active. Thus, the family of four is taking full advantage of the global pandemic and are nurturing the wild nature of their children.

Family Time During The Pandemic

Since the pandemic has forced people inside their homes, every family is searching for ways to channel inner peace and cope with the situation. Children are pretty vulnerable as they might not understand the sudden changes in lifestyle. Thus, it is essential to keep them engaged.

Pastrana’s family has done a remarkable job at that. Aforementioned, Travis Pastrana’s daughter, Addy, is a dynamic child and is up for different activities.

However, their recreational activities involve entertaining activities like sliding down the plastic pipe dressed in characters, trampoline, and many more. Besides the funs and games, lit looks like Pastrana’s girl is homeschooled along with her younger sibling.

Although Travis Pastrana and Lyn-Z’s daughter is young, she seems to share a great bond with her parents. Addy Pastrana is an energetic girl, but she also appears to be a gentle and compassionate girl at the same time.

Addy spends a lot of time with her parents and sister, Bristol Murphy Pastrana. The family goes on tour, make memories, and learns new stuff. Addy is the star of her father’s Instagram and Facebook. He posts pictures and videos of Addy riding, etc.

Because Travis Pastrana’s eldest daughter is still young and has a long way to go, she is likely to excel in whatever she wishes to be. Furthermore, she seems to be kind in heart and sharp in mind. Henceforth, let’s hope we get to see more of her in the future. She could shine as a pro motorcyclist like her father or skateboarder as her mother.

Addy is of American origin, which means Noble.