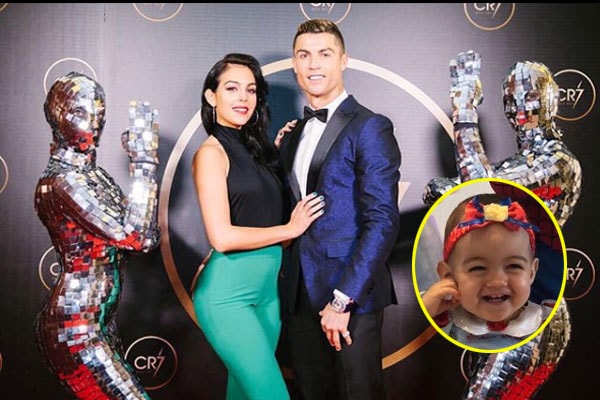 Cristiano Ronaldo and his girlfriend Georgina Rodríguez along with their three children blissfully welcomed the youngest member of the family Alana in late 2017. Not only the Ronaldo family but the million fans of CR7 greeted the cutest Alana with sweet messages and wishes on the couple’s social media.

Cristiano Ronaldo’s daughter Alana is so sweet and adorable that no one can take their eyes off of her picture. Ever since Alana’s arrival, the couple has been continuously sharing Alana’s lovely photographs. Alana is the youngest bundle of joy to Ronaldo couple. She is only one year old, and she already knows how to melt our heart. The video of her embracing her brother Mateo is the cutest thing ever on the internet!

The cute Alana gets to spend most of her time with her mother Georgina and her siblings. She is such a blessed child to have been surrounded by the most lovely people. The adorable Alana is only five months younger than twins Eva and Mateo. She has already made a good bonding with the twins as they are the closest to her age. They even look like triplets at first glance.

While the three of Cristiano’s children were conceived via surrogacy, Alana is the only one he had with his gorgeous girlfriend Georgina. All of them are equally beautiful and loved by everyone. We wonder if the couple is planning to add yet another member in the family.

Alana is a name for a girl. It is derived from German which means precious. In Gaelic, the term Alana means beauty or serenity. Likewise, Martina is a feminine form of the name Martin which is derived from Latin Martinus. It is the name of the Roman mythological god of war, Mars.