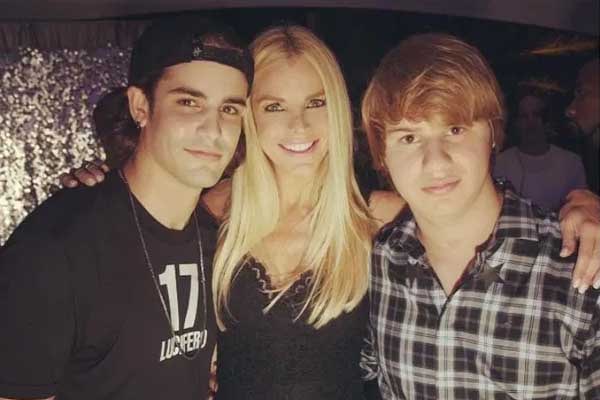 Best known as one of the lead cast of The Real Housewives of Miami, Alexia Astrid Figueredo is a proud mother of two young lads. She was married to Pedro Lui Rosello from 1992 to 1996, and at that time period, she gave birth to her two sons, Peter Rosello and Frankie Rosello.

Alexia Echevarria’s son Peter Rosello was born on August 11, 1992, whereas her other kid Frankie Rosello was born on February 26, 1997. Alexia is quite close to her two sons and often spends as much time as possible with the jewels of her life. So, let’s dig deep and get to know more about her sons.

The RHOM’s star Alexia Echevarria’s son Peter Rosello has had quite a past. First, he was arrested for assaulting a homeless man, and a year later was caught for possession of marijuana and drug paraphernalia.

Let’s start with the assault, in 2012  Peter filmed himself punching the nuts of a homeless man out of nowhere. He and his friend first filmed Peter punching the man and later uploaded the video. The video itself was not that too long, as first of all, Peter looked into the camera and introduced the prank as Punching a hobo in the nuts.

Peter then walked towards the homeless man who was just minding his own business and said he wanted to give him $5, but he instead punched at the crotch of the harmless man.

Secondly, a year after, Peter was again arrested for illegal possession of marijuana. He was at the passenger’s seat when his car struck a parked unmarked North Miami Police vehicle and fled. After getting caught, the police searched the vehicle and found a backpack with a jar full of marijuana and a pipe. As punishment, Peter received community service and agreed to enter a first offender intervention program.

How’s His Relationship With His Mother?

Moving on, Peter shares a lovely relationship with his mother and his younger brother Frankie.  Despite his Instagram being private, we can find tons of pictures of Peter on his mom’s account. He just loves spending time with his mother, partying and traveling.

Alexia Echevarria’s son Peter Rosello has also appeared numerous times on the reality show RHOM alongside his mother and brother. The family of three spends quite a lot of time with each other. And his recent birthday was grand as well, and all of his friends alongside his family were present to celebrate it.

They say your past is like the shadow that never leaves you alone, even if you manage to get rid of it, it comes back one way or another. Similar to that Alexia Echevarria’s son Frankie Rosello is still getting over his past accident which took place on August 14th, 2011. He was riding his car on a rainy morning when the vehicle lost control, then jumped the median and hit an oncoming SUV. Frankie was rushed to the hospital for emergency brain surgery. He spent three months in a medically induced coma to allow the swelling on his brain to settle down. As well as another three months in the pediatric intensive care unit for recovery.

Yet even after recovering from his injuries, Frankie is still affected by aphasia, a condition caused by his brain injury that limits his ability to communicate properly. His mother says he is a fighter, he learned to walk even before he could talk. So, yes, he will recover from his current stage and will go on to live a long healthy life.

Like his elder brother Peter, Frankie is also really close to his mother. As addressed above, he loves traveling with his family. He and his brother once traveled to Paris with their mom and her boyfriend, Todd Nepola.

The four of them had quite a fantastic time together, and after returning home, Alexia celebrated her son’s birthday with a boom. She says her son gives her hope and reason to continue. She also added her sons are the most precious jewels she has and will ever have.