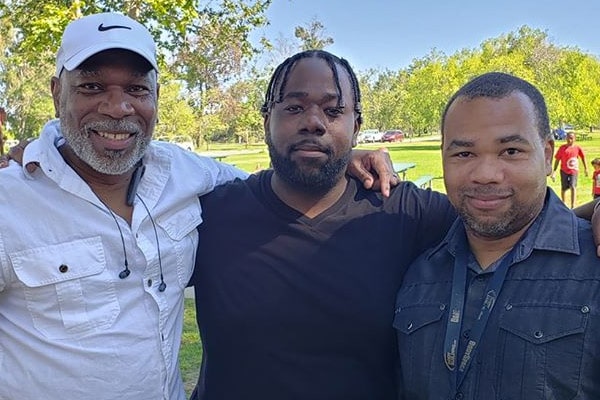 Alfonso Freeman is the son of the legendary American actor, Morgan Freeman. He decided to follow in his popular father’s footsteps in the acting field since his young age. And, he succeeded in his mission to be a famous actor. Alfonso has appeared alongside his famed dad, Morgan, in various movies, including The Shawshank Redemption, Seven, Nurse Betty, Ten ’til Noon, and many more.

Furthermore, Alfonso Freeman voiced the character of Fred Redding in the short parody The SharkTank Redemption. He lent his melodious voice in various episodes of Robot Chicken like ‘Drippy Pony’ and ‘The Munnery’. Apart from being an actor, Alfonso is a gospel singer too.

Keeping all the professions of Alfonso aside, let’s talk about his personal life. Please get familiar with Alfonso Freeman’s children and know where they are now in this article.

The spitting image of father Morgan Freeman, Alfonso married thrice in his lifetime. The privacy loving, Alfonso’s first marriage was with Cynthia Gafford. The two tied their marital knot on 20 March 1982. But they could not keep their relationship for long. As a result, Alfonso and Cynthia legally separated in 1989, citing irreconcilable differences.

Though the former couple, Cynthia and Alfonso, ended their marriage with a divorce, they had three kids together. They gave birth to sons, Alfonso Rene Freeman II, Joshua Caleb Freeman, and Donovan Lee Freeman, during their marital bonding. Later, after their separation, they shared the custody of their kids.

According to the Facebook profile of Alfonso Rene Freeman II, he went to Paramount Unified School District High School. Later, he graduated from the Long Beach City College Athletics – LBCC Vikings. And currently, he lives in Lakewood, California. Aside from that, no more information about Alfonso II is available for the public.

Similarly, Alfonso’s youngest son, Donovan, also went to the same school his brother Alfonso II attended. After that, he studied Music at Long Beach City College. Currently, he studies Music production at The Los Angeles Film School. It seems like Donovan aims to be a famous musician in the coming days.

Talking about Joshua, there are no social media accounts registered to his name. Also, their father, Alfonso, does not share much about his sons before the media. Probably, he wants his children to live a healthy life away from the prying eyes of the press.

Furthermore, Alfonso is active in social media sites with the name Unkofonz. Similarly, Joshua also might be operative in online sites with other names. So, it’s quite tough to say what Alfonso Freeman’s son, Joshua, might be doing in the present. We hope with time, Alfonso will disclose about his juniors for sure.

Alfonso’s Other Marriages and Kids With Them

As mentioned earlier, Alfonso wed three times in his life. After the divorce with his first wife, Cynthia, Alfonso began dating Larcenia Young, followed by a wedding on 20 August 1994. After some years, they also separated—however, the actual date and reasons for their disunion is yet to be revealed.

There is no news about Alfonso and Larcenia, having kids together to date. In all probability, Alfonso and Larcenia might not want to open up anything regarding their children. It seems Alfonso intends to keep the details of his all little ones far from the reach of the spotlight. Moreover, Alfonso Freeman’s children also look like they have an aversion to paparazzi.

Furthermore, Alfonso took the wedding vows with his third wife, Michelle Rene Freeman, on 29 April 2014, after getting engaged in October of 2013. Since then the love-birds are enjoying their happy married life. The family privacy concerned Alfonso has not revealed any details about the kids with his current wife too.

The name Alfonso is a Germanic name which means noble and ready.

Joshua is a Hebrew origin name, which means Jehovah is generous.

The name Donovan is originated from Irish, which means dark princeling.