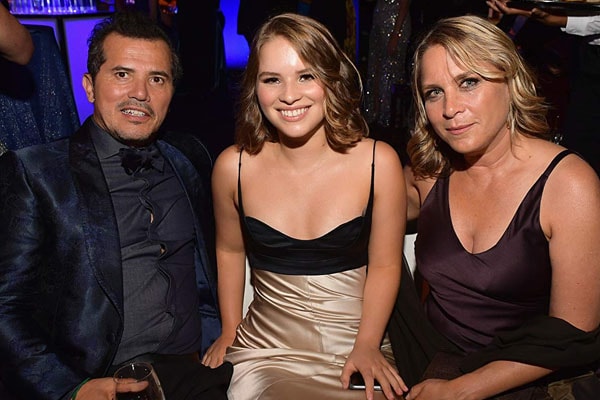 John Leguizamo‘s daughter with wife Justine Maurer,  Allegra Leguizamo, is an American actress. She was born on 23 October 1999, in Manhattan, New York, USA. Allegra is the eldest daughter of the pair.

She also has a younger sibling – Lucas Leguizamo.  Likewise, he is an actor too. Lucas was born on December 5, 2000.

Allegra Leguizamo Is An Actress

Being born to one of the most proclaimed Hollywood artists might just encourage you to follow in their footsteps as well. And we can say that it is pretty true for John Leguizamo’s daughter, Allegra Leguizamo. She lent her voice to one of the characters alongside her father in the blockbuster ice-age series. Moreover, John Leguizamo is one of the major characters in the movie Sidney (Sid), a clumsy ground sloth known for his loudmouth. Allegra starred as Aardvark girl with her brother Lucas Leguizamo, who voiced the role of Aardvark boy. The children of John Leguizamo though only appeared in Ice Age: Dawn of the Dinosaurs (2009) and Ice Age: Continental Drift (2012).

Allegra Leguizamo has also starred in the movie Lockdown as Marie in 2019.

Though Allegra has come to the limelight more often than not, she has kept her personal life more or less to herself. She has an Instagram account but on private. Allegra also uses Facebook but only seems to use it occasionally. Allegra went to Grace Church School, a private co-ed independent school in downtown Manhattan. She graduated in 2014 after completing her 10-year education.

Currently, Allegra Leguizamo is the class of 22 at NU, USA.

Dad John Leguizamo hardly posts about his family life. He posted a picture with daughter at the Sundance Film Festival.

John Leguizamo is a very supportive father and is proud of the person his daughter has become!