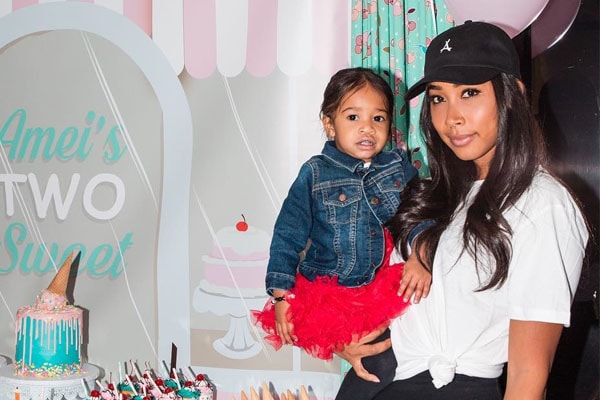 The stunning reality star, Apryl Jones’s daughter, A’mei Kazuko Grandberry was born on March 7, 2016, with Singer and ex-husband, Omarion. The young A’mei enjoys being with her family and has an intimate bond with big brother, Megaa.

The former Love and Hip-hop: Hollywood stars share an adorable son, Megaa Omari, besides A’mei, who celebrated his fourth birth in August 2018. However, Apryl and Omarion parted their ways four months after giving birth to their only daughter, A’mei in July.

The former LAHH stars and couple haven’t had the smoothest breakup and the relationship was so bad as to where they couldn’t even be cordial for A’mei and Megaa. However, Parents Omarion, Apryl, and the whole family unit got together to celebrate the birthday of the youngest, A’mei. Despite having a fair share of differences and months since their split, mother Apryl and father Omarion were all smiles as they hugged their angle-like daughter.

The second born of parents, Apryl Jones and Omarion, A’mei is the little sister of the young and adorable 4-year-old Megaa. The lovely siblings share a strong bond and are inseparable.

The stunning mother Apryl has become a perfect example of how a mother should be. Mother Apryl’s life revolves around her children and believes that the two beacons of lights make everything possible even in the midst of chaos. Apryl does not hesitate to upload adorable pictures of her children with heartwarming captions.

The mother of the beautiful baby girl, Apryl identifies as Chinese, Taiwanese, Mongolian, Native American, and black. The unique name “A’mei Kazuko Grandberry” is a compilation of words from various parts of the world and has a meaning “beautiful harmonious child” in  Apryl’s culture. The word “Mei” means beautiful in Chinese while the word “Kazuko” comes from the Japanese for a harmonious child.