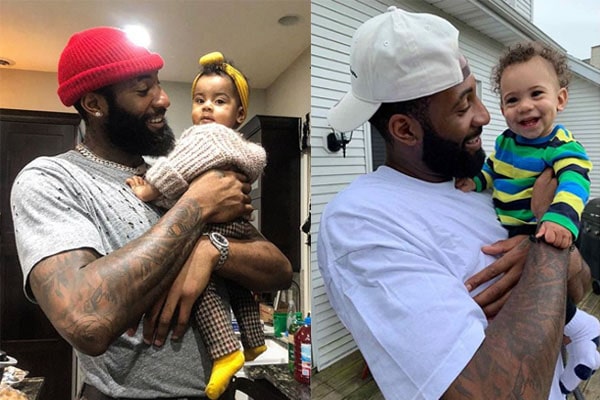 Andre Drummond is the father of a son and daughter with his two different baby mamas. Image Source: Instagram.

The American basketball player for the Cleveland Cavaliers in the NBA, Andre Drummond, is a father of two children, son Deon King Drummond, and daughter, Aubrey EllaRose Costadoni-Drummond. He had his kids with two different baby mamas; Deon with Abigail Russo and Aubrey with Elizabeth Costadoni.

Both of Andre Drummond’s baby mamas happen to be Instagram models. The NBA baller, however, is still single at the moment. Drummond, as a dad, must be doing a great job at fathering his adorable kids. So, let’s not waste any time and know more about Andre Drummond’s children, Deon and Aubrey.

Born on February 21, 2019, Deon King is Andre Drummond’s son with his baby mama, Abigail Russo. You apparently can’t stop yourself saying, “Aww! He’s so cute.” He has a half-sister named Aubrey Ellarose Costadoni-Drummond. Deon’s mom, Abigail, is a gorgeous Instagram model, as stated before. Since his parents are not together, Abigail took the responsibility to take care of her adorable son.

Going through Abigail Russo’s Instagram, you can see that she frequently posts lovely photos of cute Deon. She loves being close to him all the time and cannot get enough of her son. Abigail is turning out to be a great mother with time. Deon’s arrival in the world brought tons of happiness in Abigail’s life for sure.

Similarly, Deon’s dad visits him very often so that he could spend precious bonding time with him. Andre must be doing everything he can to bring the priceless smile and glow on Deon’s face.

Perhaps, Deon has a beautiful life that has been provided by his mom. The mom-son duo is so obsessed with each other. Cute Deon King Drummond will grow up to be a handsome lad in the future.

Aubrey EllaRose, Living With Her Mom

After a month of her half-brother Deon’s birth, little Aubrey EllaRose stepped into the world on March 22, 2019. Lovely Aubrey is Andre Drummond’s daughter with his baby mama, Elizabeth Costadoni. She is a half-sister to her half-brother, Deon King Drummond. Andre and Elizbeth’s happiness was probably over the moon when they became parents to their gorgeous little daughter.

Just like Deon, little Aubrey also lives with her mom, and Elizabeth hasn’t left any spot to make her life a marvelous one. She’s always by her daughter’s side and is also doing so wonderful as a mother to her. Elizabeth also posted a short video of her daughter, Aubrey, on her 1st birthday on her Instagram. Aubrey’s smile in that video just melts your heart.

Well, the Cleveland Cavaliers star seems to drop by frequently. He usually hangs out with her so that he and his daughter could have strong bonding. So, in all, Andre and Elizabeth are very fortunate to have a cute daughter in their life. They are going to love her so much more than anything in the world.

Furthermore, the little girl also has got an Instagram account, but it seems to be in private.

The Philadelphia 76ers center is undoubtedly an amazing father to his children. However, he gained more dad points after saving his little boy from a terrible pool accident. In a video shared by Andre himself on his Twitter, Drummond’s son, Deon King, falling in the pool.

No one was harmed in this video pic.twitter.com/POumiU9HGk

Seconds later, Andre came into the frame and jumped into the pool without any hesitance, and pulled his son out. While the incident must have been traumatic at that moment, the player shared the video and assured everyone that no one was harmed.

Well, looking at the video, one thing is clear, Andre Drummond is a “Superdad.”

Deon King Drummond – Deon is the variant of the word ‘Dion’, which is short for Dionysius, the god of wine. The name King means ‘ruler’ and is of American origin.