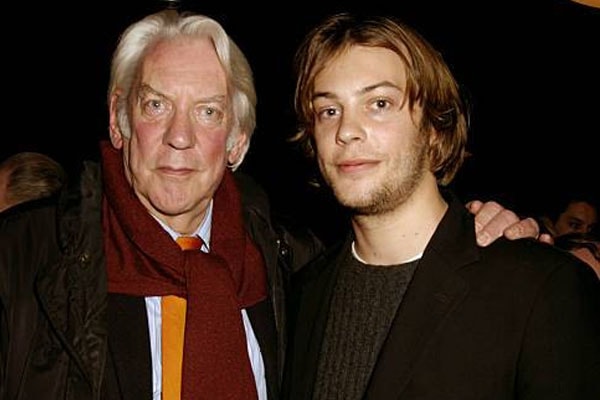 Donald Sutherland‘s son Angus Sutherland was born on 3rd of September 1982 in Los Angeles, CA, USA. His full name is Angus Redford Sutherland. Donald had Angus together with his loving wife, Francine Racette. Angus is a Canadian actor and producer and is best known for his role in November Criminals, Undefeated, and Kidnap.

Angus Sutherland Is A Canadian Film And Television Producer

Donald Sutherland’s son Angus is a film and TV producer. His television works include Commander in Chief and DollHouse in the years 2005 and 2009 respectively.

Besides being a producer, Angus is also an actor and has appeared in a number of filmographies including Familiar Strangers, Harold & Kumar Escape from Guantanamo Bay, Lost Boys: The Tribe, Kidnap, and November Criminals.

Angus Is Born In The Family Of Actors

Angus Sutherland’s parents, Donald Sutherland and Francine Racette both are actors. The handsome Angus’ parents tied their wedding knot back in 1972. Including Angus, the adorable couple has three children together.

As mentioned before, Angus’s father Donald is a legendary Hollywood actor and has acted in multiple movies in the 70’s era including Kelly’s Heroes, Don’t Look Now, The Dirty Dozen, Ordinary People, and many more. However, he is retired now and enjoying his old days with his dear wife Francine. Also, Francine is a Canadian actress and has landed on roles including Au revoir les enfants, Lumière, and The Disappearance.

It is quite obvious that Donald Sutherland’s son Angus went on to follow on his father’s footsteps. Furthermore, Angus’ siblings Rossif had also chosen acting as his professional career. Looks like the acting profession in the family will be continued for generations.

Angus is a male given name of Scottish Gaelic origin that provides the meaning of “one strength.” However, his middle name Redford is given by his father in honor of Robert Redford. Robert had directed Donald in Ordinary People.