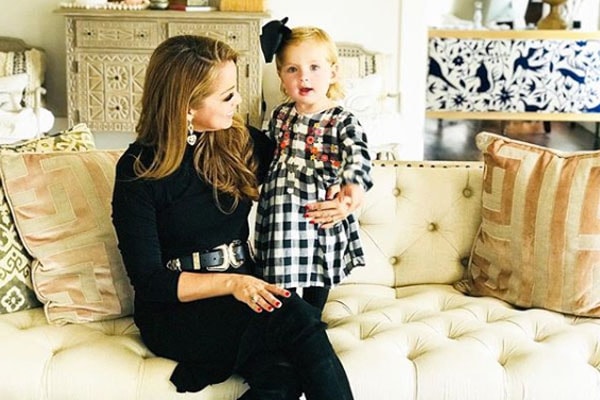 While the time of birth the cute Anna Carina weighed 6 pounds and 2 ounces. Marcela Valladolid’s daughter Anna was born in San Diego, California at 4:55 p.m. When Anna Carina arrived into this world, her mother Marcela thanked God and to her family for the perfect baby girl. She further added that her daughter Anna is a fighter and strong and her elder brothers are absolutely in love with her.

The 40-year-old chef, Marcela’s Instagram is filled with photos of Anna Carina Button-Valladolid, her little one. Plus at time Marcela also uploads adorable videos of her daughter, Anna Carina speaking in Spanish. The blonde hair, fair complexion really suits the endearing Anna and her big green and grey eyes is a cherry on top.

Both Marcela Valladolid and her fiance Philip Button must be proud to welcome such a beautiful person in their family. We are sure the lovely Anna Carine can melt anyone’s heart.

Anna Carina, Youngest In The Family

As stated earlier, Anna Carina Button-Valladolid has got two elder siblings, and she is the youngest among all. Anna usually spends most of her time with her elder brother David, and he adores her a lot. Anna Carina and David tend to spend most of their time around their loving mother Marcela and looks like the chef really knows how to pamper her younglings.

We wonder if Marcela will also make her daughter Anna Carina Button-Valladolid a great chef like her.

The name Anna is a Latin form of the Hebrew name Hannah which means grace or beautiful.

As for the name Carina, it is an Italian baby name which means beloved or dear.

#internationaldaugterday I promise to fight for a world where your voice, freedoms and needs are heard, valued and respected. pic.twitter.com/8CNfbmI6Ds