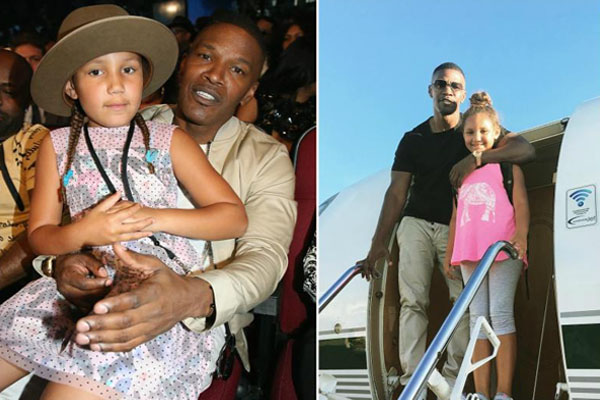 Annalise Bishop is Eric Marlon Bishop aka Jamie Foxx‘s daughter with his baby mama, Kristin Grannis. She was born on October 3, 2008. The beautiful Annalise also has a half-sister and she is none other than Corinne Foxx. She also gets along with her half-sister Corinne a lot.

Annalise’s dad, Jamie Foxx is an American actor, singer, and songwriter. Along with that, he is also a record producer and comedian as well. The talented Jamie Foxx has appeared in lots of movies like Django Unchained, Robin Hood, Ray, etc.. Similarly, he has his own TV shows such as The Jamie Foxx Show, Beat Shazam and so on.

Jamie Foxx’s daughter, Annalise Bishop lives with her mum and pretty much hangs out with her dad most of the time. She is living a lavish life with her momma, Kristin.

She is having a lavish life due to her dad’s fantastic net worth of $100 million. Possibly, Jamie Foxx provides a certain amount of money to his baby mama as child support. Furthermore, the father-daughter duo likes to hang out, visit different places with each other. And on top of that, Annalise also loves to play basketball with her dad.

Recently, it was reported that the actor, Jamie Foxx bought a $1.7 million home for his baby mama, Kristin, and daughter, Annalise. It shows that Jaime loves his daughter very much and wants to give all the happiness to his beautiful daughter.

Just weeks after declaring himself single at an Oscars afterparty, the 51-year-old actor was seen reuniting with his ex-girlfriend, Kristin Grannis. Jamie Foxx’s daughter, Annalise was also spotted with the couple in Los Angeles suburb Woodland Hills.

The reason behind declaring ‘single’ was the split up between Jamie Foxx and his girlfriend, Katie Holmes. Maybe, this can lead to the patch-up between Annalise’s parents.

Is there any chance that Jamie and Kristin are going to sort out their problems and reunite as an ideal couple? We may find out soon enough. Let’s hope that Jamie and his baby mama, Kristin will unite and provide their joint love to their youngling.

Annalise is a word that is formed for the combination of two words i.e. Anne which means ‘gracious’ and Liese meaning ‘God is my oath’.