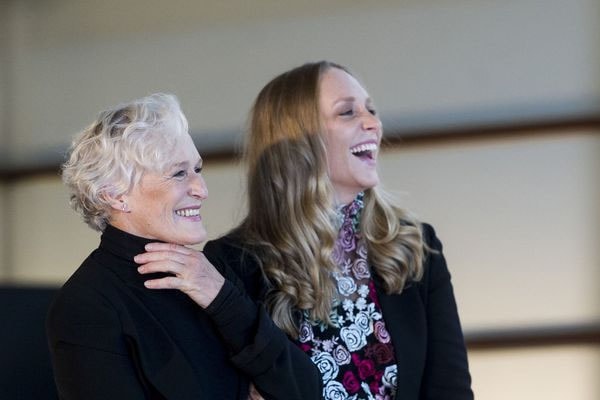 The American actress and producer, Glenn Close’s daughter, Annie Maude Starke, was born on April 26, 1988, in Connecticut, USA. The only daughter of Close with her former husband, John Starke, Annie, is an actress and a spitting image of her mother.

The stunning actress, Annie Maude Starke is the grownup and married daughter of the famous mother, Glenn Close. The thirty years old celebrity baby and actress officially exchanged the vows with her now-husband Marc Albu in a grand wedding in 2018.

Not everyone considers the phrase “you’re turning into your mother”a compliment, however, looking like her mother was a job requirement for the famous actress, Annie Maude Starke. The actress playing the younger version of Glenn Close in the new movie “The Wife”, Annie Maude Starke, is the real-life daughter of Close.

The incredible movie is the first major movie role for the thirty years old, Annie. The mother and daughter have collaborated closely on developing the part and have put a lot of their souls into the character.

The movie is produced by the ex-husband of Close and father of Annie Starke, John H. Starke. This is not the first time for mother-daughter duo working together. Annie has worked together in various movies like Albert Nobbs, Father Figures, where Annie is once again playing the younger version of Glenn’s character.

The only daughter of Glenn Close, Annie Maude Starke, walked down the aisle with her partner, Marc Albu, in 2018. The romantic couple tied their knot in Annie’s mother, Glenn’s estate in Bedford Hills, New York. The affair looked brought out stars and socialites of all sorts. Some of the famous guests include Kick Kennedy, granddaughters of Robert F. Kennedy- Rumer and Tallulah Willis.

The beautiful name Annie is the diminutive of Anna and is most likely a variant of a Hebrew name Hanna. Annie was a sincere and merciful woman in the Bible. Therefore, the meaning of the beautiful name is “gracious” or “favoured.”

The Old German feminine name is a beautiful name for a baby girl. The variant of the name Matilda has a distinct meaning and the meaning of the name is “powerful battler”.