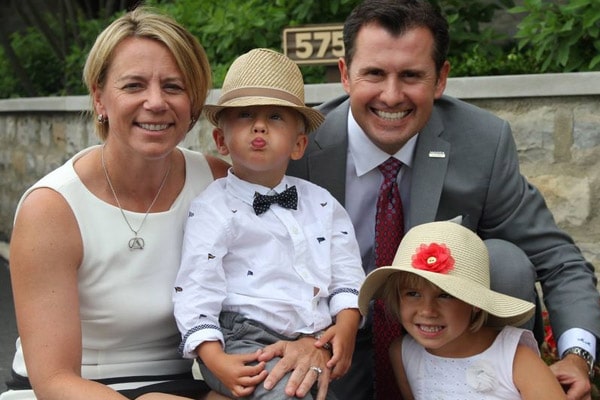 Annika Sorenstam is unarguably one of the greatest female golfers of our generation. Sorenstam is often regarded as the best of all time. During Annika’s sixteen years, Hall-of-Fame career, she won countless awards, rewrote the record books, and changed the way women’s golf was played and viewed. Annika’s global, on-course success and knowledge of the business helped her become the first and only female golfer to create a successful business brand, ‘The ANNIKA Brand.’

Besides being one of the best golfers in history, Annika Sorenstam is a proud wife and a mom. She is married to Mike McGee since 2009. Moreover, she is a mother to two adorable kids with McGee, Ava Madelyn McGee and William Nicholas McGee. So, get ready to know more about both of Annika Sorenstam’s children.

The retired Swedish professional golfer, Annika Sorenstam, married former sports agent Mike McGee on 10 January 2009. Annika Sorenstam’s husband proposed to her with an engagement ring in August 2007. It has been over a decade since the couple tied their marital knot. Nevertheless, the spark in their relationship is still the same as they had before marriage.

The long-time husband-wife duo, Annika and Mike, welcomed their first kid together, a daughter named Ava Madelyn McGee, on 1 September 2009. Annika Sorenstam’s daughter arrived a year after she retired from the game to start a business and a family.

Aforementioned, Annika is a blessed mother to two beautiful kids. Besides her daughter Ava, she has a son named William Nicholas McGee.

The eight-time LPGA PLayer of the Year, Annika Sorenstam, gave birth to her second child, son William Nicholas on 21 March 2011 at 6:33 pm. William was very eager to join his sister and parents, that he arrived nine weeks earlier than the due date. Annika Sörenstam’s son was born healthy, weighing 2 pounds, one and a half ounces, and measuring 15 inches long.

Annika, the proud and overwhelmed mom, tweeted the news of her son’s birth and shared her surprise with her followers. Like her oldest child, Ava, Sorenstam often uploads snapshots with her husband and her kids on her Instagram and Facebook pages.

Annika Sorenstam’s Children Seems To Be An Avid Sports Lover

Aforementioned, Annika and her husband, Mike, upload photos of their daughter and son regularly on their social media pages. By seeing the snapshots, the look-alike both kids of Annika seem to be interested like their parents in the sports industry.

Both Ava and William are often spotted playing golf with their celebrity mom on the golf course. Besides, Annika Sorenstam’s son, Will, seems to be interested in Pickleball and soccer too. Moreover, he enjoys his music and drum classes as well.

Furthermore, the talented and disciplined kids of Annika Sorenstam go on holiday with their family to various destinations. They also love and enjoy helping their mom, Annika, in the house chores like gardening, cleaning rooms, and cooking.

Going through the posts shared by Annika and Mike, it looks like their young ones are sports-freak as they are involved in several games from such a young age. Who knows? One day these junior versions of Annika and Mike might establish themselves in sports like their famous momma. Let’s hope so.

Moreover, Annika Sorenstam made her debut in the senior category and managed to win the prestigious US Senior Women’s Open. She defeated fellow Swedish golfer Liselotte Neumann in a thrilling competition and clinched her first senior trophy.

Sorenstam’s debut in the senior golf tournaments is undoubtedly a proud moment for the family. And her children might also be excited about their mom competing again. Annika is definitely an inspiration for her two kids.

Before taking the wedding vows with their father, Mike McGee, Ava McGee, and William McGee’s mother Sorenstam was in a marital relationship with David Esch from 1997 to 2005. The former couple, Sorenstam and Esch, met in 1994 on the driving range at Moon Valley Country Club in Phoenix. Sorenstam was an LPGA rookie, whereas Esch was working for a club manufacturer at that time.

After meeting, David and Annika fell for each other and later began dating. After a year of staying in a romantic relationship, the then-lovebirds engaged at the end of 1995, followed by marriage two years later in 1997. However, they officially separated in 2005, citing irreconcilable differences.

During the togetherness of Annika and her ex-husband, David Esch, they did not have any kids together.

Despite the previous failed marriage, Annika Sorenstam is committed to her present husband, Mike McGee. Currently, Annika and her husband, Mike, live happily on a tranquil, leafy golf resort in Orlando with their two gorgeous children. And only time will tell if both the kids decide to become professional golfers like their mother or choose a different career.

The Latin origin name Ava means like a bird. Likewise, the masculine given name William is of Germanic origin, which means resolute protector.