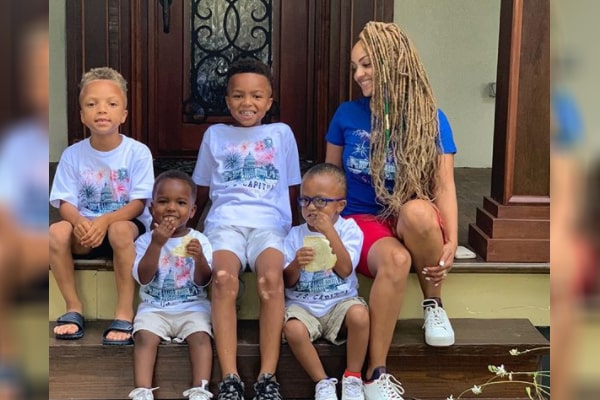 Anthony Mackie's children are away from the media scrutiny. Image Source: Sheletta's Instagram.

Anthony Mackie is an American actor and film producer featured in several films and series, including Talk, 8 Mile, etc. Gaining global recognition via the Marvel Cinematic Universe in Captain America: The Winter Soldier and Avengers: Age of Ultron, and so on, he is one of the most recognized names in the entertainment industry.

Besides being a terrific actor, Anthony is also a humble man and a doting father of four. However, Anthony is known for keeping his life private so, here’s everything we found out about Anthony Mackie’s children with ex-wife, Sheletta Chapital.

If anyone is confused about how a relationship lasts long and splits amicably, ask Anthony Mackie and his ex-wife, Sheletta Chapital.

The former couple were high school sweethearts and went through their fair share of memories. Furthermore, Mackie’s ex-wife, Sheletta, is gorgeous and hilarious. Thus, she is, without a doubt, a keeper. Plus, they knew one another since they were seven and had a history of relationships.

According to Page Six, Mackie’s marriage was low-key and relaxed. The pair welcomed four babies together before parting ways amicably in 2017. According to TMZ, Anthony filed for divorce in 2017 and finalized the following year.

Anthony Mackie Keeps His Babies Away From Social Media

Captain America star, Anthony Mackie, is a private person. He doesn’t need more explanation since he married and divorced privately. Besides his marriage and separation, Mackie’s children are also a matter of secret he keeps.

Although papa Mackie kept his sons away from social media, his ex-wife, Sheletta, updates whereabouts of their childddren. However, she refers them according to their birth year.

Anthony Mackie’s children are darn cute, and they are growing up steadily in proper parental supervision. Mackie’s baby mama shares their funny moments, their growing moments, and everything Anthony refrains from.

It looks like Anthony and Sheletta manage time wisely as the four boys are minor, and the involvement of both parents is crucial.

Anthony Mackie Is Teaching His Kis To Be Responsible

Aforementioned, Anthony Mackie’s kids are away from the social media world, and he maintains their privacy. Furthermore, he only has one post in Insta that too of shoes and garners 239k followers.

Although Mackie chose to keep his kids away from the public scrutiny, he freely talks about his kids. Anthony is humanitarian and wants his kids to live in a better world.

While talking to Fatherly, Anthony revealed that he and his boys talk about everything, and Anthony lets them know about their rights, and their decisions have consequences. Furthermore, Mackie discusses how his life changed after having kids and how he talks about voting history with his oldest kid.

Likewise, Anthony mentioned that the favorite part of fatherhood is witnessing the relationship his sons share. Moreover, he loves to see their personalities develop and proud to see them growing into caring people.

Although Captain America star Anthony Mackie’s children are away from the public, they live pretty well and in an excellent environment. Let’s hope to see them in the future.