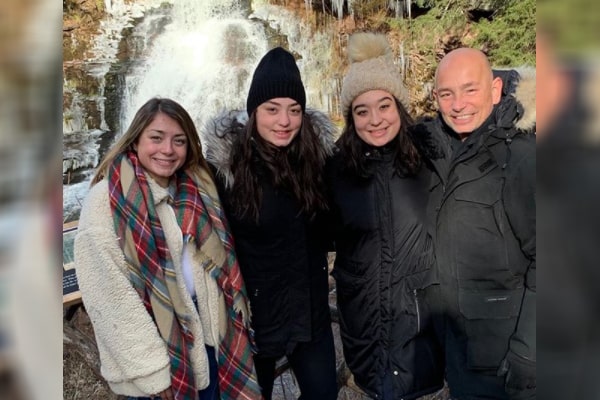 Anthony Melchiorri is a television personality and a hospitality expert known for co-producing and hosting the Travel Channel’s show, Hotel Impossible alongside Blanche Garcia. The show ran for eight seasons and concluded in 2017.

Earning a good reputation as a hotel expert, Anthony Melchiorri is also known for his parental skills and notorious secretive nature. Defying all the barriers he has maintained around his personal life, we are about to tear apart the wall and write about Melchiorri’s kids with a longtime yet mystery partner.

Hence get ready for some vague but interesting information of Anthony Melchiorri’s children.

A Proud Dad Of 3 Daughters

Aforementioned, a hospitality expert, Melchiorri, is aggressively secretive about his private life and prefers it covered rather than put forth to the world. Therefore, we do not have much about Anthony Melchiorri’s wife.

However, a thing can be assured that Anthony welcomed three beautiful daughters with his longtime partner, including a twin. Furthermore, the Melchiorri couple has welcomed their daughters, Nina Melchiorri, Mia Melchiorri, and Cara Melchiorri.

Although the Hotel Impossible host never tagged his babies and often left them to fly with their wings, Anthony Melchiorri’s daughters haven’t disappointed him yet. The Melchiorri sibling-trio has made several appearances in their father’s show. However, their mother is yet to make her tv debut.

According to Forbes, Anthony revealed that one of his little ones figured her aim as either an athletic trainer or a hotel manager. Hence let’s find out more about Anthony Melchiorri’s daughters in detail. Also, buckle up, because Melchiorris are jaw-droppingly beautiful and talented.

Amongst Melchiorri’s three daughters, Mia Melchiorri chose a quirky career as an actress. She currently works for The Green Room 42 and has ample experience on stage since childhood.

It looks like one of Melchiorri’s twin daughters inherited his innate ability to adapt in front of a camera since childhood and decided to become a theatre artist.

Furthermore, Mia, she included her years-long experiences on stage in her CV. Her works include projects like Serving You Sondheim, Beauty, and the Beast, Rumors, Singing in the Rain, etc. Furthermore, she not only acts but can sing and dance as well.

Former Hotel Impossible host, Anthony’s baby girl, went to Stella Adler Studio of Acting and graduated from The New School in theatre, music, and dance. The vibrant young girl is optimistic about her career as an actress and looks forward to a big break.

Cara & Nina Melchiorri, Anthony’s Other Children Are In Completely Different Path From Their Sibling

As stated above, Anthony Melchiorri’s daughter, Mia, is pursuing her career as a theatre actor. However, Cara Melchiorri seems to have chosen a different genre. She attended Iona College to have a diploma in public relations and image management.

According to Cara Melchiorri’s LinkedIn, she served as a summer intern for The Books Group Public Relations. She further seems close to both her siblings and balance their siblingship. Regrettably, she is a bit of a private person, and hence her Instagram is private.

However, Anthony’s little bundle of joy, Cara, is a social bee and frequently appears on Mia’s Insta. She further uploaded a few pictures with her friends and all.

Similarly, contrasting Mia and Cara’s career choice, Anthony Melchiorri’s daughter, Nina Melchiorri, seems athletic. According to her Instagram bio, she plays volleyball in her school. However, Nina’s Insta is private, and she seems to be away from Facebook. Interestingly, she frequently comments on her sisters’ pictures, which shows they have a serene relationship.

Let’s hope the businessman’s daughters manage to outshine their father and make a name of their own in the coming days.

The name Mia means of the sea or Bitter and has a Scandinavian origin. Similarly, Nina has a Spanish origin, which means a little girl. Likewise, Cara originated from Italy, which means Dear One, Beloved.