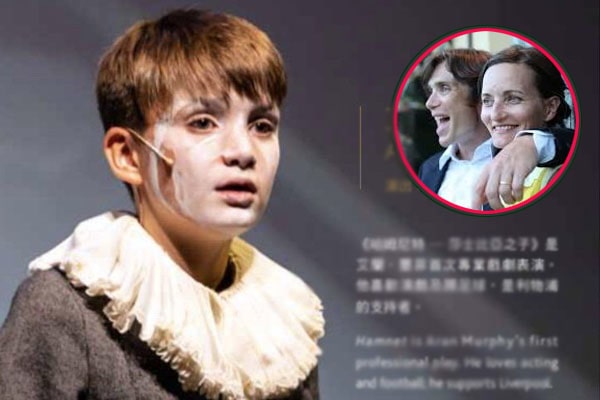 Irish film and theatre actor, Cillian Murphy‘s son Aran Murphy was born in the year 2007. Cillian had Aran together with his wife, Yvonne McGuinness. The absolutely adorable couple tied the wedding knot back in the year 2004. The amazing duo is together ever since.

Cillian Murphy and his lovely wife Yvonne are the proud parents of two children. Their son Aran has a sibling brother named Malachy Murphy. Malachy is elder to his brother Aran, born in the year 2005. Both of Cillian Murphy’s children were born in Sweden.

At a very young age, Aran has showcased his excellent acting skills in theatre. No wonder where his acting talents have come from. Aran seems very much inspired by his father’s acting career. The 12-year-old boy has played in many plays including the title role in Hamnet at Dead Centre, Irish Theater company. The play got some mixed reviews but his part of the role was much appreciated.

Like father like son, the boy is here to stay and create his own profile. It is quite evident that Aran went on to follow his father’s footsteps to live up to his name. Well as for his mother, Yvonne McGuinness, she is a visual artist and a producer.

Is In The Media Limelight

Since his early days, Cillian Murphy’s son has been a favorite of the media. Rarely, the child actor is seen traveling and enjoying vacations with his parent and elder sibling. However, the versatile actor generally tries to keep his children away from the limelight. It looks like Cillian wants his son to focus on his career rather than enjoy the media’s spotlight.

Nevertheless, Aran with his other three happy members of the family looks absolutely cute and adorable together. The hard-working nature of Aran surely reflects the bright future of the cute child on the days to come.

Aran is a masculine name of Biblical origin providing the meaning of “enlightened, mountain of strength.”