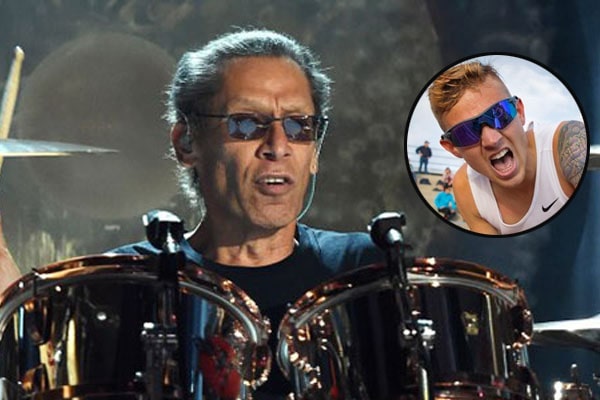 You guys may be wondering what Alex Van Halen‘s son, Aric Van Halen is currently doing, did he follow his dad’s footsteps for a career, is he very close to his parents, and whatnot. Well, if you really want to know all these answers to these mind-boggling questions, catch up with the article and don’t miss out on even a word.

Aric Van Halen’s potential talent turned into his real ability and strength. He is a steeplechase runner and has run in different competitions. For instance, he ran in the men’s 3000-meter steeplechase at the US Track and Field Championships in Sacramento, Calif, in 2017. He made it to the Olympic trials in 2016 and it was a huge accomplishment in his career. Alex Van Halen, as well as Kelly Van Halen, must be very proud of their son despite the divorce.

Aric’s interest in becoming a runner was not his first choice. He caught his gym teacher’s attention after running a 6:05 mile for a fitness test. In the spring, it was a dilemma for Aric to decide whether or not to run track or go for the baseball team. According to Running Magazine, he said,

“I decided to try out for the baseball team and halfway through tryouts I realized the love of the game wasn’t there anymore. So I informed the baseball coach at the end of the day that I wouldn’t be back the next day and I would be doing track. Twelve years later I’m still running track.”

As of now, Aric’s best steeplechase time was 8:32.92 in 2014. In contrast, Evan Jager, the Olympic silver medalist, has a lifetime best of 8:00.45. The athlete is well-focused in his career and wants to prove the world as the best. Probably, we will see Aric, kissing the Olympic gold medal for his country in a few years.

Photography Is Aric’s Other Passion

Besides being a steeplechase, Aric found his other passion for photography. Going through Aric’s photography Instagram profile, he has awesome photo collections of portraits, landscapes, tear sheets, and sports. The photography is likely a side-job for Alex Van Halen’s son. Wandering around the world and capturing the moments inside the lens seems to joy Aric, a lot.

You can surf on Aric Van Halen’s self-titled website ‘Aric Van Halen‘ and give a glance at his photography knacks and skills. As Competitor Magazine, Run The Edge, Finish Line, Janji, Soleus Running, etc. are his clients, he must be funneling in some profitable cash as a photographer.

Therefore, it seems as though Aric Van Halen is enjoying every bit of clicking photos. If everything goes right, we may see him in the A-lists of photographers in the coming days.

Aric And His Siblings’ Love For Each Other

As stated above, Aric Van Halen is the eldest brother to his half-siblings, Malcolm and Stella. He immensely bonds with both of them. Aric and Malcolm are like best friends to each other. He never ever misses wishing Malcolm on his birthdays. Aric and his half-sister, Stella also have this strong bond of sibling-love that will never fade away.

In conclusion, Aric and his siblings’ love for each other is very powerful. Aric is always there for them if they are in any trouble.

However, there are not many details regarding Alex Van Halen’s girlfriend or supposed wife. Even if he has then that woman is one lucky person to have found someone as talented as Alex Van Halen’s son.

The name Aric came from Hebrew origin, and it refers to ‘Lion Of God.’