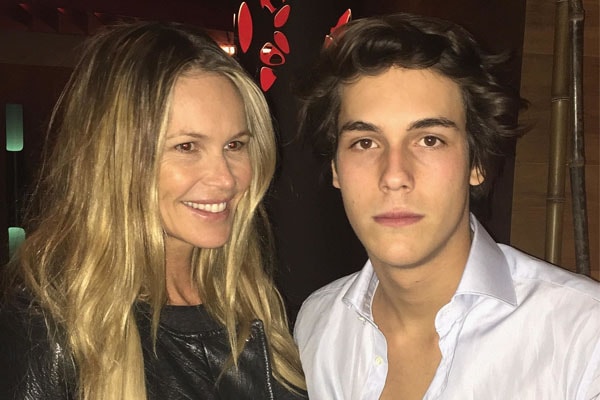 The Australian model, and businesswoman, Elle Macpherson’s son, Arpad Flynn Alexander Busson was born on February 1998 in New York City. The firstborn of Elle with her former husband Arpad, Flynn is the big brother of young Aurelius Cy Andrea Busson, who was born on February 2003 in London.

The proud mother has a strong bond with her boys and they often share various tender family snaps on social media. The pilot son, Flynn moved to Miami in the year 2014 with his mother and family.

The 90’s reality-defying supermodel Elle Macpherson was a big hit in her days. Likewise, fast-forward more than a decade and the 54 years old aforementioned son, Flynn is all grown up and ultra handsome. The hot Flynn has grown into a handsome young man and even has friends in high places. Flynn is besties with Princess Olympia of Grace. However, the 20 years old beauty is off limits and has a beautiful girlfriend, Camille Martayan.

The young sons of Elle live with their mother and share a strong bond with the family. According to Woman’s Day, Elle was set to keep her $26 million Miami mansion and also an extra $53 million in cash alleged divorce.

The 54 years old mother of two is proud of her two sons. According to the businesswoman, Elle, the young sons helped her a lot during the times of need. Furthermore, Macpherson feels grateful for the loving sons and proudly flaunts them in public as her incredible men. Besides that, the handsome sons of beautiful Elle have different accents. The eldest son, Flynn, has an English accent whereas the youngest son of the supermodel has a very broad Australian accent.

The lovely name “Arpad” of “Árpád” is a unique name for a baby boy. The masculine name of a Hungarian origin and the meaning of the name ‘Arpad” is “seed” or “barley”. Besides that, the biblical meaning of the name Arpad is “The light of redemption”.

The unique name “Flynn” is the transferred use of the surname. The Anglicized form of  “Gaelic Ó Flain” is derived from Flann which means red. Therefore, the meaning of the name “Flynn” is red-haired one”