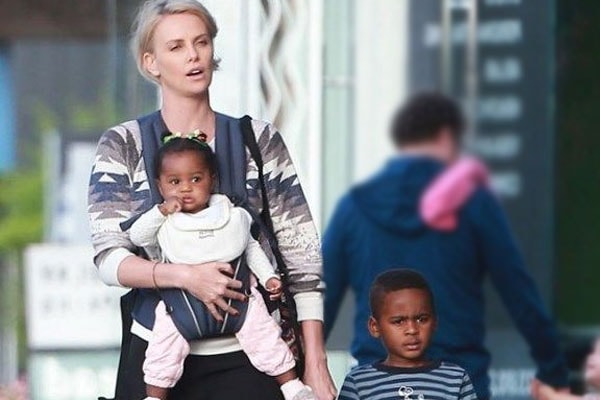 The South Africa-born Hollywood actress, Charlize Theron is the mother of two adorable children- August Theron and Jackson Theron. The young children have a strong and intimate bond with their mother and were born in 2011 and 2015 respectively.

The 42-year-old mother is a single parent to seven years old Jackson and two years old daughter August who she adopted as babies. The Atomic Blonde star adopted her first son in the year 2012 and daughter three years later and is proud of her decision.

The proud mother confesses that she has bad days and makes mistakes, in addition to the tantrum stages of her little kids at her worst days. However, there is not a single day when she wishes she hadn’t adopted the kids. Mother Charlize confesses that the children need to know where they come from and be proud of that.

Despite being a proud mother, Theron would still not travel with her kids to some parts of America as she believes racism is a bigger problem now in America than ever. According to single mother Charlize, a lot of moms feel the right to correct and from her just because her children are of a different race. The mothers also come up to her and tell her that she is screwing everything up just because she uses formula rather than bought breast milk.

Is Eldest Son Jackson Transition Into A Female?

The young Jackson is not new to dressing up in what would identify as traditional girl clothing. The young boy has been caught by Paparazzi several times sporting a pink tutu and ballet flats twinning with his adopted sister. It is commendable that the actress is letting her child express himself the way he likes. However, not everyone feels the same and mother Theron was dragged for her parenting skills. Furthermore, the internet exploded after the Tully star let him dress up as Elsa from the movie Frozen in Halloween 2016.

Despite the internet is unsure if the baby boy is actually transitioning or he is just a young non-conformist regarding his style choices. However, his sense of style and new ensemble definitely sparked some interesting Twitter debates on gender bending.

The lovely name “August” is both a given name and surname developed form the Latin name “Augustus”. The name is also from the Latin word “Augere” which mans “to increase”. The ancient name “Augustus” was a title given to Roman emperors and has the meaning “esteem” or “venerable”.

The beautiful and famous name “Jackson” is a Scottish name for a baby boy. The meaning of the wonderful name is “God is gracious” or “God has shown favour”. Besides that, the name is based on the famous names  “John” or “Jacques”.