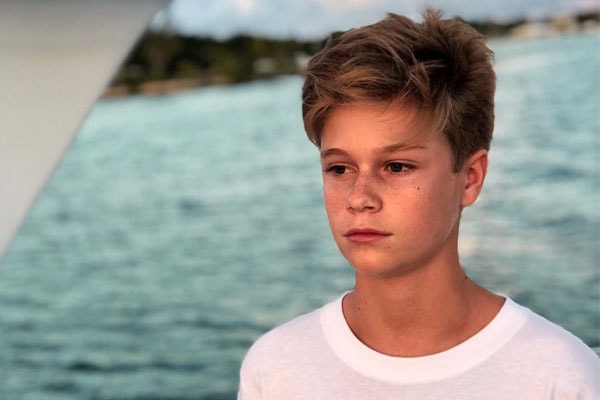 The proud parents, Elle and her former partner, Arpad Busson, started dating in early 1996. The Macpherson-Busson family shared a lavish mansion in London. However, the relationship of the soulmates did not last long and the ex-partners split their ways in the year 2005.

Aurelius Cy Is All Grown Up and Undeniably Handsome

A post shared by Elle Macpherson (@ellemacphersonofficial) on Mar 7, 2018 at 1:46pm PST

The youngest son of the supermodel, Aurelius Cy, is a 15 years old beauty. Likewise, it appears that celebrity genetics are immune to the perils of the awkward teenage years. The tall, bronzed young man, Cy has inherited his stunning mother’s good looking genes and looks adorable. Towering over supermodel mother since a very young age, it is likely that the young Cy will be walking in Elle’s fashionable footsteps. Besides that, Cy has already had multiple photo shoots for fashion magazines and is now in his way to make up a name for himself in the entertainment industry.

The Australian supermodel, Elle Macpherson has many titles but proud mother tops the list for the successful entrepreneur. The 55 years old shares a strong bond with her baby boys and love being together. Supermodel Elle Macpherson is proud of her young boys and the relationship between the mother-son duo is admirable.

The Australian supermodel Elle Macpherson is a proud mother of young boys. Macpherson took Instagram to celebrate the graduation of her son from middle school. The enduring beauty stood beside her recent middle school graduate son wearing a suit with considerable sentimental value.

The youngest son, Aurelius Cy, shares a similar resemblance with his supermodel mother and the uncanny similarity is pointed out by many. However, neither mother nor the son mind being called similar and take pride in their physical appearance. The youngest son and little brother of  Flynn, Cy loves skateboarding and adventures. Besides that, handsome Cy is close to his sibling and the two brothers are

The name “Aurelius” is a traditional family name. The name was derived from the Latin word “aureus” which means “golden, glided”. The masculine name has a meaning “the golden one”. Besides that, Marcus Aurelius was a 2nd-century Roman emperor and philosophical writer. “Aurelius”