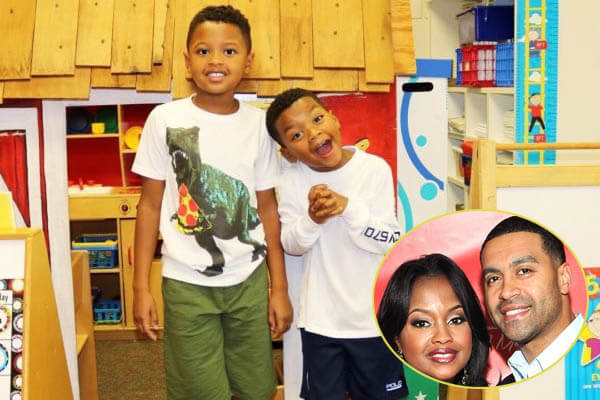 Phaedra Parks‘ sons are Ayden Nida and Dylan Nida, whom she had with her ex-husband, Apollo Nida. The couple tied the knot in 2009, and later divorced in 2017. The former Real Housewives of Atlanta star, Phaedra is raising her two sons on her own. Phaedra’s ex-husband Apollo went to prison and recently became free as of June 2019.

The estranged father, Apollo, is undoubtedly delighted to hug his kids after five years in prison. Although Ayden and his younger brother Dylan often visited their dad while in prison. Moreover, Apollo became engaged to Sherien Almufti, a real state investor, while still inside the prison. As of now, Phaedra and Apollo’s sons have grown up to be of school-going age.

Phaedra and Apollo’s two sons are growing up as time passes by. Ayden, 9, and Dylan, 6, are enjoying their lives, and they most likely go to school.

Likewise, the brother duo lives with their mom, Phaedra. It is without a doubt that Phaedra is a loving mother, as she loves to hang out with her sons. She even takes them to watch Teenage Mutant Ninja Turtles!

Phaedra is more like a friend to Ayden and Dylan. She possibly fulfills the role of a father too. As we know, the boys’ father, Apollo, doesn’t live with them and visits them occasionally. A thoughtful mother, Phaedra, makes sure to celebrate her sons’ birthdays with a blast.

It seems the family also gets a special visit by Santa on Christmas. Just imagine the gifts Ayden and Dylan receive.

Furthermore, both Ayden and Dylan also remember to wish their mother during Mother’s Day. They undoubtedly have the most loving and caring mother in the world. Following their mother’s footsteps, Phaedra Parks’ children might pursue a career in the entertainment industry.

Ayden is a variation of Aidan, which is of Irish origin. Its meaning is “little fire.”

Dylan is a Welsh origin name, which means “son of the sea” or “born from the ocean.”