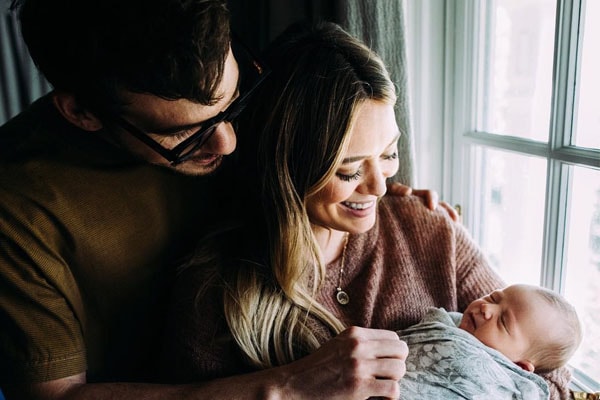 The American actress, singer, and songwriter, Hillary Duff’s daughter, Banks Violet Bair, was born on October 10, 2018, as the youngest daughter of the family. The little Banks is the small sister of six years old big brother, Luca Cruz Comrie.

The proud parents, Hilary and Matthew, have been dating on-and-off for over two years. Duff is the mother of young and adorable Luca Cruz from her marriage to NHL pro, Mike Comrie. Despite being the second child for Duff, Banks is first for Matthew Koma.

The stunning icon Hilary officially announced being the mother of two on Thursday, October 25. The Younger actress, Hilary Duff took upon Instagram to announce the arrival of her baby girl, Banks.

Actress Duff shared an adorable snap of herself and her husband, Matthew cradling their newborn daughter with a heartwarming caption. The 31 years old Duff could not stop gushing about the young angel. Besides that, the youngest daughter has been successful in stealing the hearts of millions of followers and fans.

Only Daughter of The Family Banks

According to the now-mum-of-two, she is keen for big brother, Luca Cruz, to experience becoming an elder brother. The family was beyond excited to welcome the baby girl into the family. Father Matthew has also been a wonderful father to the little girl.

The proud father used to call his little girl his “Little Princess” even before her birth. Furthermore, Hilary mocked about not being able to decide if it’s the pregnancy or his actions that is making her fall in love with him even more.

The unusual name “Banks” is of English and Scottish descent and is a topographic name for someone who lived on the slope of a hillside or by a riverbank.

The famous name “Violet” has a very simple meaning which is purple. However, the Smithsonian Gardens claim that a white violet symbolizes “innocence“.

The famous name Blair seems to have a more complicated past attached to it. The lovely name is just an altered spelling of German Baer, which allegedly means “a bear”. Besides that, in a native descent of Bavaria, Bair literally means “Bavarian“.