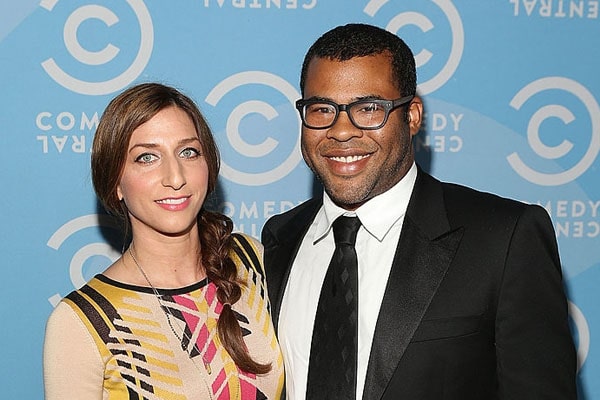 The comedian couple, Chelsea Peretti and Jordan Peele, got married on April 26, 2016. They met back in 2013 through their mutual friends. They always had a low-key relationship, so when they announced that they got married, it blew away everyone. Later, they welcomed their first child Beaumont Gino Peele on July 1, 2017.

Son Of A Talented Father

Beaumont Gino Peele’s father, Jordan Peele, was born on February 21, 1979. He is an American comedian, actor, known for his works on Comedy Central’s Key and Peele. He is a very talented director too, who has directed blockbusters like ‘Us’ and ‘Get Out.’ We can assume that baby Beaumont must have a pleasant time with his father, Jordan.

Since Beaumont’s father is a comedian, Jordan must make his son laugh a lot. And we can guess the father-son duo has got a tight-knit bond.

Has A Funny Mother

Little Beaumont Gino Peele’s mother, Chelsea Peretti, is an actress, comedian, and writer. She is known for portraying Gina Linetti in Brooklyn Nine-Nine. Chelsea is a well known stand-up comedian who is always entertaining her audiences on her Netflix show One of the Greats or through her Instagram captions or tweets. She is herself a bundle of joy and is filled with more great happiness now with her son, Beaumont.

its very possible i was holding my son in a tiny tux 😍😍😍😍😢😢😢😩😩😩 pic.twitter.com/sMibQPmYjb

Chelsea, along with her husband Jordan, doesn’t share much about their son. As they are keeping a low profile of their baby, they may be wanting Beaumont to grow without the invasion of cameras. Whereas, mama Chelsea is always teasing her audiences with funny shots of her son.

We can see that despite having shows to film, Chelsea Peretti spends time with her son Beaumont Gino Peele. We hope the mother-son duo is happy, healthy and are ready to make daddy Jordan laugh.

Well, Beaumont is the son of such talented actors; we may hope to see him on the screen soon. We wish Chelsea Peretti’s son Beaumont Gino Peele to grow up healthy, happy and find his dreams like his parents.

The name Beaumont comes from Old French beu, bel ‘fair’, ‘lovely’ + mont ‘hill.’ As for the middle name Gino, it is of Italian descent, which implies ever-living.