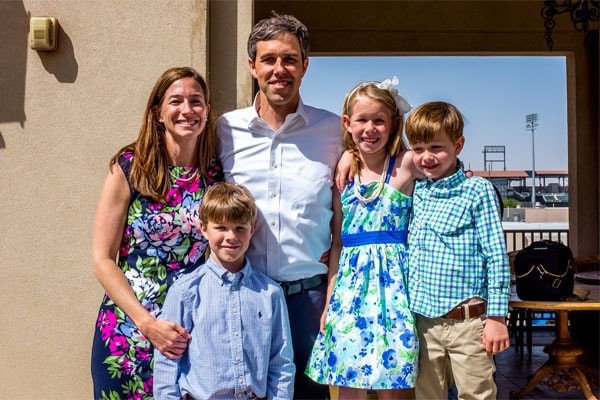 American businessman, as well as the politician of the Democratic Party,  Beto O’Rourke, has three adorable children with wife Amy Hoover Sanders. They are Ulysses O’Rourke, Molly O’Rourke, and Henry O’Rourke. Beto O’Rourke’s children are all under the age of 15.

The children of Beto O’Rourke are very supportive of their father running for the presidency. However, the age of the children has not been revealed. The children join him in in his formal as well as casual outings. O’Rourke children also enjoy watching games like baseball with their father.

Although the adorable children don’t use social media, the businessman loves sharing their pictures in social media. Molly is very active as well as creative. She also helps her father inform the public about events.

Beto O’Rourke and his family were together in the DIY, grassroots campaign on the eve of election day 2018. His son Ulysses was beside him while Beto gave his concession speech. Beto O’Rourke was accompanied to the field at Southwest University Park which is the home to the minor league El Paso Chihuahuas baseball team.

On the same event, as soon as Beto O’Rourke finished delivering his speech, he left the stage with his lovely wife, Amy. On the Election Night in the Chihuahuas, O’Rourke lifted his daughter, Molly, into the air after giving his concession speech.

How Is Beto O’Rourke As A Father?

By the looks of it, Beto O’Rourke is a loving as well as an adventurous father. He shows his compassion, love, dedication, and appreciation towards his children in his social media posts.

The O’Rourke family loves traveling. They enjoy long drives as well as playing with snow during cold days. The children accompany their father for weekend meals in McDonald sometimes, whereas sometimes they are helping him cherish the moment. The O’Rourke family also loves animals.