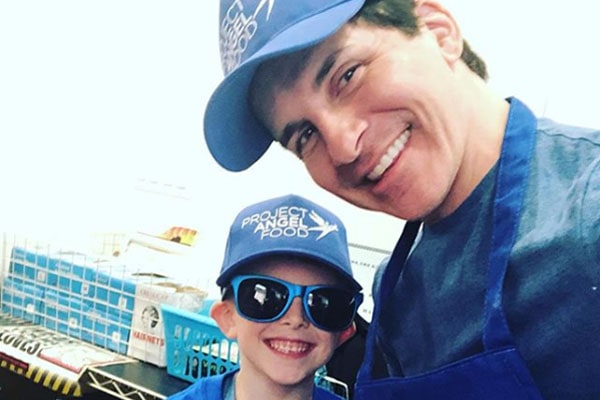 Hal Sparks needs no introduction, he is an actor, director, and a producer known for Queer as Folk, Spiderman 2 and Dude, Where’s My Car?. He became a first-time father in 2011 when he welcomed his son Camden Harrison Sparks. Hal introduced his son at the 2011 AIDS Walk in LA. However, he never revealed the name of his son’s baby mama.

There was a rumor of Hal being gay, but as we have come to know, it was only a rumor. He is in a relationship with Summer Soltis of Girl Boss Productions, since 2012. Many people believe that Summer is the biological mother of Camden. So, let’s get to the baby mama of Hal Sparks’ son Camden Harrison Sparks.

Hal Sparks hasn’t revealed the name of his son Camden’s biological mother. However, some site suggests that his long-time girlfriend Summer Soltis is his son’s biological mother, but that’s not correct. Despite being in a relationship for nearly a decade, the pair doesn’t share any children together. Summer has a son named Ethan McCoy, but she is not the mother of Hal Sparks’ son Camden Harrison Sparks.

Furthermore, we can just assume that Camden’s mother is a charming person with blonde hair. We know she has blond hair as Hal Sparks’ son also has blonde hair, but his father doesn’t. So we could speculate he has inherited his mother’s hair color. Besides that, we really don’t have much information regarding Camden’s mom. It surely will continue to remain a mystery until Hal tells us who is the biological mother of his son Camden.

Despite introducing his son in 2011, the actor has not revealed his son’s face to his fans. He has uploaded numerous pictures of his son but all showing the back of his head. But besides his son’s face, Hal has given an idea of how his son behaves in real life. Little Cam loves spending time with his father and both the father-son duo have been spotted enjoying their time in the game corner playing arcade games.

Moreover, Hal loves clicking funny pictures of his son and uploading it on his Instagram giving his fans a belly full of laughter. Little Cam also loves running ahead of his father and his dad Hal loves chasing him. We can say where little Cam goes his dad follows.

Plus, the father-son duo of Hal and Cam love spending time in the warm bed of nature. Hal tends to spend as much time as possible with his little toddler and both have been spotted doing some charity work together. Hal’s little lad is a huge Marvel fan mainly of Antman.