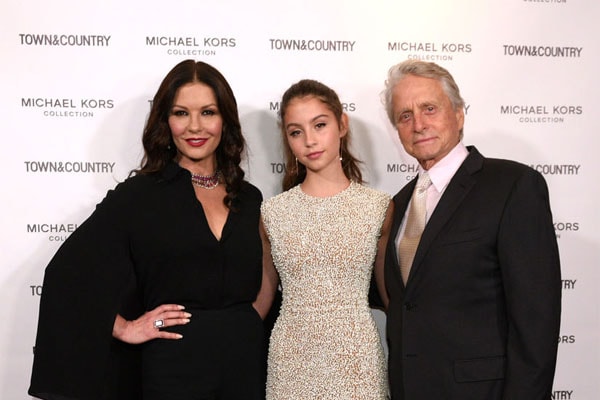 Born on April 20, 2003, Carys Zeta Douglas is Michael Kirk Douglas‘ daughter whom he had with his wife, Catherine Zeta-Jones. She is the youngest child in the family. The beautiful Carys has two siblings, a half-brother named Cameron Douglas and a brother named Dylan Michael Douglas respectively.

Carys’ dad, Michael Douglas is an American actor and producer. He is very talented and has won numerous awards including two Academy Awards, five Golden Globe Awards, a Primetime Emmy Award, etc. Similarly, her mum, Catherine Zeta-Jones is a Welsh actress and has appeared in many top movies such as The Mask of Zorro, Entrapment, etc.

The gorgeous Carys Zeta has very interest in clothing and fashion. She has her own unique fashion sense. Since Carys was born in a family of celebrities and had a lavish childhood, she loves to wear outstanding and expensive outfits that express her feelings very well.

Despite becoming an actor, she is probably trying to become a fashion model. As she has good taste in clothing style and fashion, she obviously fits to be a fashion model star. Michael Douglas’ daughter, Carys has a plus point because she has learned a lot from her mum.

Catherine is an expert in fashion and style so Carys really admires her mum. Also, in an interview, she claimed that her mum, Catherine, helped her in every step of the fashion. Perhaps, Catherine is an inspirational role model for Carys.

Michael Douglas’ daughter, Carys Zeta Douglas has an Instagram account where she has posted lots of photos exploring around the world. Carys with her brother, Dylan even has gone to India to view the Taj Mahal.

missing u and this place @dylan__douglas

Similarly, she has been to Paris and has posted a photo of herself near the Eiffel Tower. It looks like Carys Zeta is very much enjoying her life exploring interesting places.

Carys is a Welsh feminine name that came from the Welsh word ‘caru’ meaning ‘to love’. Likewise, the word Zeta is the variant form of the Hebrew word ‘Zayit’.