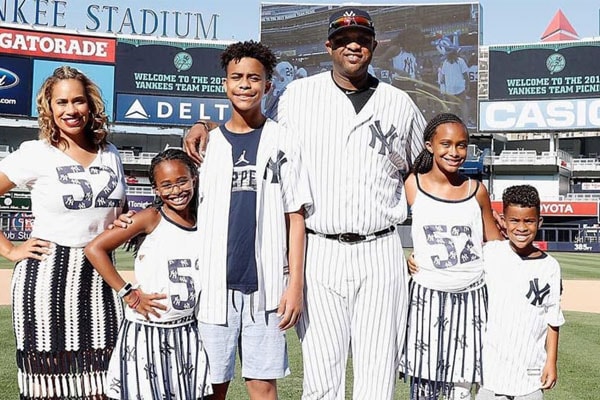 CC and Amber Sabathia with their children

The star occasionally posts about his children in his social media sites. Mr. Sabathia revealed in an interview with Parents that although his hectic schedule, he manages to Skype and FaceTime with his kids, who seem to be very understanding of their Father’s Career. The doting dad of four said that his devotion to his career had him miss out on many moments of his children growing up, but added later, that he makes up for it during the off-season.

Who are CC Sabathia’s Children?

CC Sabathia and Amber Lynn made their marriage official in the year 2003; the same year when Amber also gave birth to their first-child, Carsten Charles Sabathia III. He is 13 years old as of present. Two years after CC Sabathia’s son Charles III was born, Amber was again pregnant with their second child, daughter Jaeden Arie who was born in 2005. 3 years later, the pair became parents for the third time, with the arrival of daughter Cyia Sabathia. Then In the year 2010, the couple had begotten yet another child, a boy who they named Carter Sabathia. The happy family of six are often pictured together.

CC Sabathia said in an interview with MLB news that his family is very supportive of his Career. They mostly come to his games and it is very comforting for him to see his children and wife out in the stands. His son Charles III and daughter Jaeden have come off age to comprehend with more precision what their father’s job is and thus want to be there in the ballpark.

For the time being, everything is going fine for the Sabathia family. But who knows that the American professional baseball pitcher could be planning on adding a new member to their already growing family.

Carsten: It means follower of Christ

Jaeden: It means God Will Judge

Cyia: It means Thanks!

Carter: It is a family name which is of Irish, Scottish and English origin.

For more updates on Celebrity Feuds, Celebrity Babies and Entertainment, make sure to catch up with us on eCelebrityMirror.