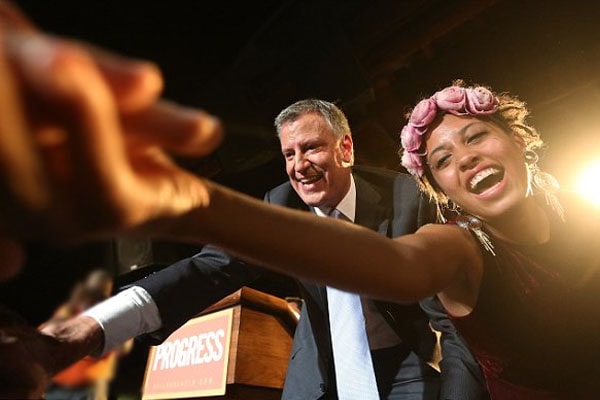 Chiara de Blasio, Bill de Blasio‘s daughter with wife Chirlane McCray, was born on 6th December 1994. Chiara is the firstborn child of Bill De Blasio and Chirlane McCray together. Chiara’s parents tied the wedding knot on May 1994, the same year in which she was born.

The beautiful Chiara de Blasio is the eldest among Bill’s two kids. She has a younger brother, Dante de Blasio born in 1997. Both of Bill de Blasio’s children are growing up well. Let’s glance at Bill de Blasio’s daughter, Chiara’s lifestyle and career.

Chiara De Blasio Had Grown Up In Political LifeStyle

Chiara’s mother Chirlane was two months pregnant with Chiara herself when she married Bill de Blasio in 1994. Chirlane adopted the role as the default parent while her husband was working for then-President Bill Clinton as the regional director of the Department of Housing and Urban Development. As mentioned earlier, Chiara has a younger brother named Dante as well.

Chiara recently graduated from Santa Clara University, USA. Back in 2014, both Chiara and Dante served as unpaid interns for City Wall. Their mother, Chirlane shared the news in a Tumblr post. She wrote:

“Chiara will be working with the Office to Combat Domestic Violence. She is passionate about working directly with people and this is a great chance for her to get involved with an important issue at the grassroots level. Chiara is ready to begin helping others, especially young women, reclaim their lives.

Looks like Chirlane is a proud mother of her daughter, Chiara.

Chiara De Blasio Got Over From A Serious Addiction

Bill de Blasio’s daughter Chiara revealed in an online video that she sought treatment for alcohol and drug abuse. She has openly shared her struggle with substance abuse and depression.

Bill de Blasio’s daughter Chiara also published an essay relating those struggles. Chiara included that she was surrounded by love but wasn’t satisfied and discontent. Her lack of gratitude was also a problem. She further mentioned that she was not born a happy person.

This acknowledgment has led to an occasional public role in her father’s administration as a mental health advocate for young people.

Surely, Chiara is an inspiration for many teens out there and the first-hand help for her father’s upcoming election.

Chiara is a feminine name of Italian origin, which gives the meaning of “light, clear.”