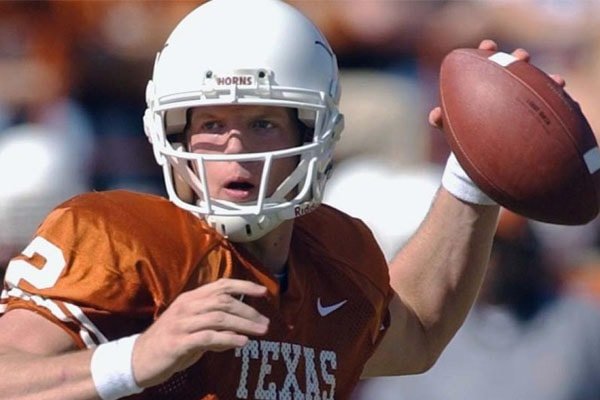 Chris Simms, born Christopher David Simms, is a famous former American football quarterback. Simms began his NFL career after being drafted by the Tampa Bay Buccaneers in the third round of the 2003 NFL Draft. Former New York Giants quarterback Phil Simms‘ son, Chris, also played for the Tennessee Titans and Denver Broncos for some years. After retiring as a football player, Simms is currently a full-time employee of NBC as a sports analyst.

The former color commentator for the NFL on CBS, Chris Simms, is a family man with a loving wife and two gorgeous children. Here, meet Chris Simms’ children and indulge yourself in some other personal facts of Chris.

The older brother of Atlanta Falcons quarterback Matt Simms, Chris Simms, met the love of his life, Danielle Marie Puleo in 1996. Both were the students at Ramapo High School in Franklin Lakes. The couple dated for eight years and finally tied their marital knot in August 2004. G. Thomas Donch, the mayor of Franklin Lakes, officiated Simms and Puleo’s marriage at the home of the bridegroom’s parents.

The husband-wife duo, Chris, and Danielle welcomed their first child together, Sienna Rose Simms, on 18 June 2006 at 6:22 pm. She weighed 7 pounds 10 ounces at the time of her birth.

Sienna was born on Father’s Day. So, her birth was a great Father’s Day surprise for Chris Simms. It was decided that their daughter’s name was either going to be Sienna or Charlotte. However, Simms told the People magazine that he did not like the name Charlotte as the Caroline Panthers are in Charlotte. And, according to Simms, that might bring bad luck to him. So, he gave the name Sienna Rose to his daughter.

Chris Simms has not revealed further details about his children. So, the childhood days and the educational qualifications of Chris Simms’ children are entirely away from the media reach.

The 1998 USA Today National Offensive Player of the Year, Chris Simms is very secretive when it comes to his personal life. He never hesitates to show off his professional career achievements through his social networking handles. However, he has always been mute regarding his personal life, including his youngsters and wife.

Celebrating my Birthday with my family and grandkids! #familytime #firstthursdayoff pic.twitter.com/3aMDK3TV4X

Chris Simms’ children never appear in public events with their celebrity father. Well, heir dad, Chris, is active in social media pages like Instagram and Twitter. As of now, Chris Simms’ Instagram has 14.5K followers, and his Twitter followers count over 45.8K. However, he has not shared a single photo of his little kids to date. Each of his social media pages is filled with posts related to his profession only.

It seems like Chris Simms does not want his children to be affected by his popularity. He wants his little ones to enjoy their childhood, just like the kids of ordinary people.

The secrecy loving Chris Simms’ wife and his two kids’ mother, Danielle Marie Puleo, is Italian. She is the daughter of Gloria A. Puleo and Robert V. Puleo of Franklin Lakes, New Jersey.

Before getting married to Chris, Puleo used to work as a manager at her father’s Italian restaurant. However, after being hitched to Chris and being a mother, she devoted all of her time raising her kids while Chris was busy with his works.

The Combination of two names, Sienna means orange-red and Rose means a flower.