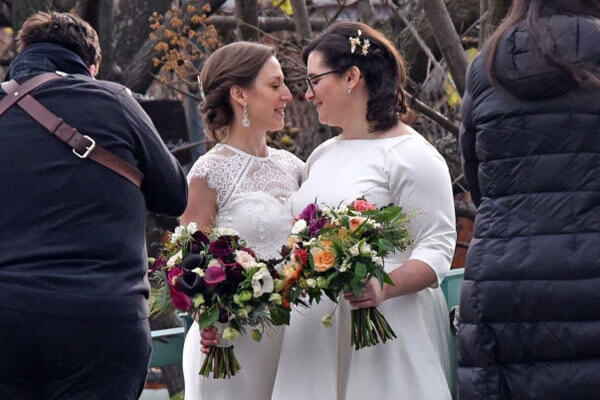 American Senator Chuck Schumer‘s daughter Alison Emma Schumer, was born in 1989. Chuck, along with his wife, Iris Weinshall, has two children, the other being his lovely daughter, Jessica Emily Schumer. The siblings, Jessica and Alison, are both married and live successful lives of their own.

As for Alison Emma’s personal life, she is a lesbian and has a beautiful wife, Elizabeth Anne Weiland. The couple was pronounced married on November 18, 2018, in Brooklyn.

To Chuck Schumer, his youngest daughter Alison is a gorgeous princess. And when Alison did come out as a lesbian, the politician father was very supportive and encouraging of his daughter’s sexual orientation.

At the city’s annual pride march, the New York Senator marched on with his shoulders back and his head high along with the city’s LGBT people as well as straight residents.

Similarly, dismissing homosexuality as a fad or disowning his daughter for being gay is not something a loving parent would do. As such, Chuck took to his Twitter after the parade to cherish his daughter’s right to her sexuality. The political hotshot feels that this year’s pride event is special to him. After all, it’s his daughter Alison’s wedding year and also the first anniversary of her “coming out” as a lesbian.

When it comes to her professional life, Alison Emma Schumer works at Facebook’s marketing division as a product manager. Her educational background reveals that she went to Harvard University. Undoubtedly, Alison’s parents are proud of their daughter for her honesty and courage to pursue her dreams and take pride in her identity.

Like all relationships, the newlywed lesbian couple, Alison and Elizabeth has got their own story about their romantic relationship. A New York Times article mentions that the pair first met online in 2015. After they felt an emotional connection, Alison and her partner Elizabeth met at a cafe in San Francisco and ate cake together.

Since their first meetup, the two have formed a tight spiritual bond. Now, they happily wake up next to each other in the morning as a legally married couple.

Moving back to her past relationships, Alison had previously dated an ex-girlfriend before finding Elizabeth. Just a month after her breakup with her unnamed partner, the two had luckily found each other’s company. All in all, it looks like the couple is enjoying their marriage and are a match made in heaven.

The name Chuck is from the Old English ‘ceorl’, which means “man.” Emma is a feminine name of German origin, meaning “whole or universal.”