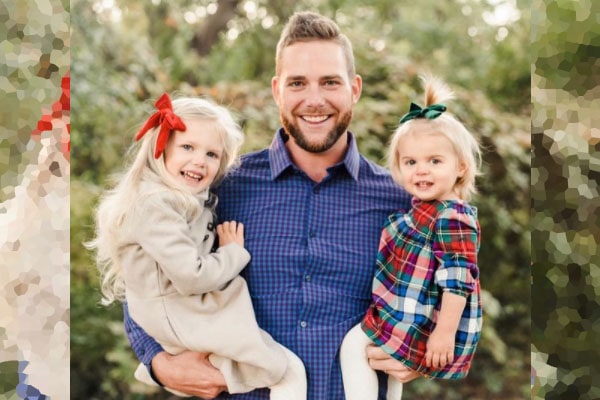 There are five people behind Dude Perfect’s formation and success, and one among them is Cody Jones. He joined one of the most subscribed sports channels on YouTube in 2009, which accumulated 54 million subscribers overall.

Besides a successful entertainment career, Cody Jones is also blessed to have a beautiful family of five with his wife, Allison M. Jones. He is, in fact, a girl dad who massively influences people from what he does.

Therefore, here is everything about Cody Jones’ daughters, Landry Jones and Lucy Jones.

Landry Jones, The Oldest In The Family

Likewise is the story of Cody Jones’ daughter, Landry Marie Jones. The pair welcomed their daughter six years after they got married, i.e., in 2016. Furthermore, the Jones couple announced the arrival of their first child via Instagram with a heartwarming caption.

Cody Jones’ wife, Allison Jones, wrote, “the greatest moment of my life.” She continued, “holding my little girl for the first time. Can’t put into words how much love I have for her!”

Similarly, upon being a father for the first time, Cody Jones shared the newborn’s picture and wrote, “MY GOSH had no idea I could love something this much” with hashtags like #GirlDad, #GodIsGood, etc.

Born on June 9, 2016, Cody Jones’ daughter, Landry Jones, is a total sweetheart, and as the oldest in the family, she loves her siblings with her small but massive heart.

Moreover, Landry is a constant face on both her parents’ Instagram. Well, she is living her best life for a five-year-old and often goes out with her father. Well, the beloved in the family, Landry, loves her younger sister, Lucy, and named her little labor-doodle ‘CATBOY’ and is enjoying her life to the fullest.

The joy of expanding a family and, to top that, the feeling to be a girl dad can never be expressed enough, and Dude Perfect’s Cody Jones, aka Tall Guy, knows the feeling.

Cody announced their second pregnancy in January 2018 with an adorable picture of his oldest holding a card, “I’m a Big Sister.” Within a few months, the Jones couple welcomed their second baby girl, Lucy Lynn Jones, in July 2018.

Cody thanked Jesus and his wife, Allison, for the blessings. Similarly, Allison also shared Lucy’s elaborative arrival and revealed that her older daughter, Landry thought she was given a real-life baby doll.

As of now, Lucy Jones is slowly growing up into a fantastic toddler. She loves hanging out with her sister, Landry, and is often pictured hugging one another. There is nothing much about little Jones as she is still small and yet to even start her school years.

However, one thing we could say for sure about Cody Jones’s daughter, Lucy, she is probably enjoying becoming an older sister to her newborn brother in 2020.

Became Sisters To A Baby Brother

As mentioned earlier, the family of four welcomed the newest member in the Jones troop. Cody Jones welcomed his third child, a son, in December 2020. He announced his son’s arrival, Easton Richmond Jones, via Instagram and praised his wife, Allison, for being brave once again.

On the other hand, Allison welcomed her baby boy without any announcement on her Instagram. She appeared late in December, claiming the Jones family has two proud sisters who love having a little brother. She also shared her gratefulness toward Christ for the beautiful gift.

Cody Jones married the love of his life, Allison Jones, in 2010 and took their time planning their first kid. Well, they’ve been multiplying every two years so, we might as reasonably expect another baby news in 2022?

Jokes aside, Cody Jones’ daughters, Landry Jones and Lucy Jones live their best life along with their baby brother. Let’s hope to see and hear more about both girls as they grow older and conquer their respective lives.

The name Landry means ‘ruler’ and has an English origin. Similarly, Lucy means ‘light’ and was derived from French.