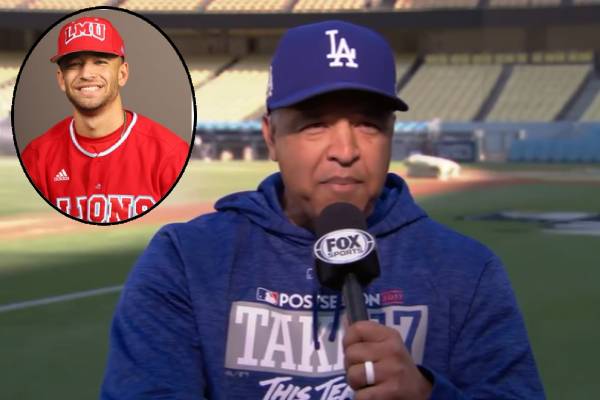 The renowned baseball manager, David Ray Roberts, shortly Dave Roberts, is the manager of the MLB team, the Los Angeles Dodgers. He is also famous by his nickname Doc. With his career stretching over two decades, he has gained huge fame and fortune.

Owing to his reputation, his personal life has been the subject of interest among his fans. Well, the baseball manager leads a beautiful family of four, including his wife and two children. Thus, today’s article is about Dave Roberts’ son, Cole Roberts.

Is The Eldest Kid

Cole Roberts was born on October 9, 2000, as the first kid to his father, Dave, and mother, Tricia Roberts. His parents must have been very happy to welcome him. Apart from him, the former player and his spouse have one more child, Emmerson Roberts.

Cole Roberts’ younger sister goes to the Santa Fe Christian High School. In addition, she is active in the school’s tennis team.

Cole Roberts’ father and mother were high school sweethearts. They walked down the aisle in 1997. At that time, Dave was playing for the Visalia Oaks of the California League. Furthermore, Dave Roberts’ wife is a Certified Specialist of wine and the co-founder of Red Stitch. In addition, the beautiful lady also has her own interior design firm.

As the child of legendary baseball professional, Cole must have inherited the love for sports from his father. Well, the manager’s son has followed in his dad’s footsteps. Above all, Cole revealed that he chose to pursue his career in baseball because he loves it and not because his father forced him. Instead, his dad asked him multiple times if he was sure of his decision and he was determined about it.

Well, Dave Roberts’ son started his playing career during his days at Santa Fe Christian High School. During his high school year, the talented manager’s son played baseball under the coach, Lance Roenicke. He played 33 games and batted .287 with 23 runs, 31 hits, and 11 RBI. In addition to that, he was drafted in the 38th round by the San Diego Padres in the 2019 MLB draft.

Congrats to Dave Roberts’ son Cole! He is committed to Loyola Marymount so we’re going to need him to fulfill that to keep him out of the NL West. https://t.co/pTZmBK6pCF

Furthermore, Cole completed his formal education in 2019 and graduated by winning a three-year varsity letter. Also, he was an honorable mention at the 2019 Rawlings Perfect Game Preseason California Region All-American.

After graduating from high school, the former player’s son enrolled at Loyola Marymount University. The young athlete is highly active in his playing career. During his first year, Cole played 16 games. He finished the year in the top five on the team in runs scored, hits, RBI, etc. In addition, he ranked first in the West Coast Conference and third in the nation in sacrifice bunts with five.

Likewise, in his sophomore year, Cole appeared in 44 games with 34 starts. He has a season-high nine assists at USC. Also, the manager’s boy posted a season-high three hits at California. Overall, the eldest Roberts is doing great in his college. We might soon see him as one of the professional MLB players in the coming days.

Who Is Cole Roberts’ Girlfriend?

Well, Dave Roberts’ son has attracted huge attention from the media. In addition, his extraordinary sports performance has also heightened his profile. Despite the fame, Cole has successfully kept his personal life apart from the media scrutiny.

Furthermore, the young baseball player is not present on any social media platforms. Thus, it has become more challenging to know about his love life. However, whoever is or will be Cole Roberts’ girlfriend, she will be a lucky person.

Nevertheless, the athlete is doing well in his professional and personal life. Hopefully, the Roberts family shares a close bond with each other. We wish Cole Roberts a rocking career ahead.

Cole is a name of Old English origin that means Victorious People.