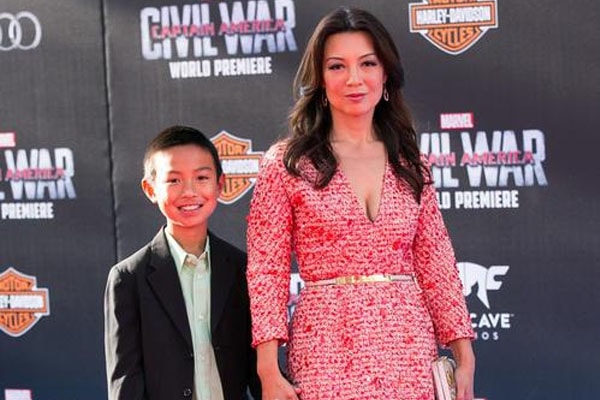 Cooper Dominic Zee, Ming-Na Wen‘s son together with her husband Eric Michael Zee was born on the 12th of October 2005 in Santa Monica. Cooper’s parents, Eric and Ming-Na, shared their wedding vows back in 1995 and the love birds are together ever since.

Cooper has an elder sister named Michaela Zee. Michaela is a talented voice actress born on the 21st of November 2000. She is 18 years of age as of 2019.

Cooper Dominic Zee Is The Youngest Member In His Family

Born back in 2005, Cooper is the youngest child of his parents. There is quite an interesting story about his birth time. According to Cooper’s mother Ming-Na, the birth was quite scary and she wanted a C-section. However, the staff of the hospital pushed for a normal delivery that made Ming curse the doctor. Ming-Na added:

“Cooper had a gigantic conehead but that he has a lot more hair than Michaela did.”

Cooper’s elder sister Michaela had been quite jealous of his little brother after his birth. Nevertheless, she loves her brother but was wanting her parent’s attention side by side.

Cooper Often Attends The Events Along With His Celebrity Parents

Just like his beautiful sister, Cooper is also very much familiar with the media spotlight. Ming-Na Wen’s son attends most of the celebrity gathering, movie premieres, and annual functions.

Cooper’s parents are one of the talented and well-established celebrities of Hollywood. The extremely talented actress, Ming-Na Wen has starred in the hit TV series Agents Of S.H.I.E.L.D. Not only that but, she is also a voice artist and has provided her voice as FA Mulan in Mulan.

Also, Cooper’s father Eric Michael Zee is an actor and has starred in movies including Shanghai and Independence Day. Even his sister, Michaela is mostly known for being a voice artist in Phineas and Ferb(2007). Including that she has worked in the fan-favorite projects like Ralph Breaks the Internet and Sofia the First.

Cooper is a male given name of English origin that provides the meaning of “barrel maker.”