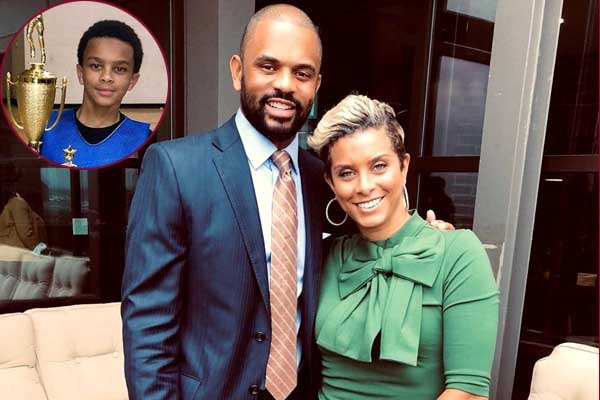 Robyn Dixon’s son Corey Dixon was born on  March 22, 2008, followed by the birth of Carter in 2010. Both of her sons have inherited their father’s good looks and competitive nature. Especially her elder son Corey, like father Juan is into sports and has won a lot of competitions. He is a unique boy, so let’s get to know a little something about Juan Dixon’s son Corey.

They say champions are not born they are made. Similar to that, Robyn Dixon’s son Corey Dixon wasn’t born a champion he became one with hard work and determination. Like, father Juan, he is also into football and was a part of the football team Columbia Ravens. In 2016, Columbia Ravens beat their opponents at Cedar Lane Park and won the 2016 MMYFCL Super Bowl Championship. According to Corey’s mother Robyn’s Instagram post, he led his team to a 19-0 championship win.

Corey is not only a Super Bowl champion but also AAU Maryland Regional 10U Champion. Well, he is a champion’s son, and he surely knows how to win. Let’s hope that the upcoming future holds something special for the one and only Corey Dixon.

It’s no surprise that Corey shares a lovely relationship with his brother Carter. He is the older one, so it’s his responsibility to keep his brother safe and support him in every way possible. Their mother Robyn is the one behind her son’s generous nature. She has taught them to have one another’s back no matter what, and the brothers’ duo is doing just that.

Furthermore, both of the brothers’ pair loves spending time with one another. They also play for the same team, they have a healthy competition going on, which is a good thing for their personal growth.

Corey spends a chunk of his free time with his mother. The mother-son duo has a special thing going on. Once mother Robyn shared a picture of her son lying on her lap just chilling. She posted that picture by writing, sometimes her son makes her sit beside them while they do their daily reading. It was a lovely picture that clearly showed the bond between a mother and her child.

Plus, she adores spending some quality time with her sons, they spend time watching Tv, visiting parks, or just enjoying a lovely day at home. Corey, too, adores his mother’s company, and he loves hugging and snuggling with his mother and younger brother, Carter.

Corey’s parents separated in 2012. However, the lovebirds seem to have reconciled and are planning to remarry. The family of four loves traveling and can be seen visiting new places. Both of Corey’s parents can also be seen supporting him during his game. He has a lovely family and a bright future ahead of him. So, let’s hope he can make a name for himself in the upcoming future.

Robyn Dixon’s son, Corey Dixon’s name, is of Irish origin, meaning “dweller in or near a hollow.”