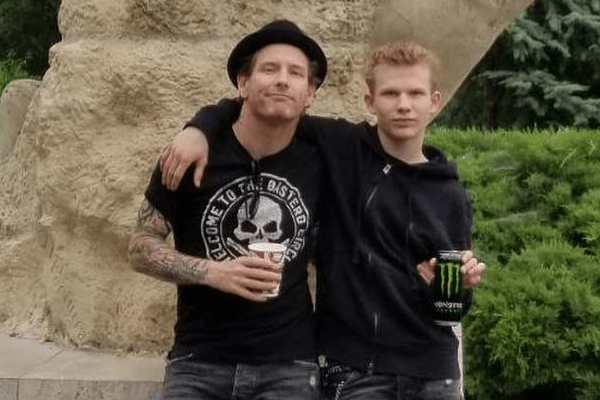 Corey Taylor‘s son Griffin Parker Taylor is now all grown up. The young Griffin is following the footsteps of his heavy metal father, Corey. Griffin is also a lead vocalist of a band. The name of the band is still not disclosed.

Griffin’s mother is Scarlett Stone, Corey’s then-fiancee. Besides having a son, Corey also has a daughter named Angeline Taylor.

If you are a metal fan, then we don’t think you need much information about the lead singer of Slipknot, Corey Taylor. Here’s a brief insight towards Corey Taylor’s son Griffin Parker Taylor.

The 15-year-old son of Corey Taylor, Griffin ParkerTaylor is all grown up. A proud moment for all the parents when they see their kids representing them and doing all good, isn’t it? And the situation is the same in Corey’s case too.

Griffin is following his dad’s footsteps. He too is looking forward to creating a name of his own in the music industry. Plus, he is got all the support he needs, especially from his father, Corey. It seems like the same music genes run through the vein of both father and son.

Corey took a back seat and let his son Griffin lead the vocals. Like father, like son, as Griffin was sporting a similar haircut to his father. With plenty of stage presence, the all grown up Griffin stepped up to the mic and rocked the song.

And for the second time in a year, Griffin joined his dad Corey onstage with Stone Sour to sing the same song. ‘Song #3’.

Only this time Corey let all his fans know that he had something special for all. Since it was for the second time Corey and Griffin were performing together, he further added that he was so much excited and declared it was one of his best nights.

Lead Singer in a Band

Griffin Parker Taylor also has his band where he is the lead singer/vocalist. The other band member is Shawn Crahan‘s son Simon Crahan. Although the name of the group has not been disclosed yet, Griffin has mentioned it in his Instagram Profile’s description.

We are pretty sure though that the young Griffin can rock the stage as much as his father, Corey. People will not be surprised when in the future Griffin might even surpass his heavy metal dad.

The name Griffin is a Welsh name which is derived from the Latin word Griffinus. In English, it is named for a dangerous or fierce person.

As for the name Parker, it is of Old English origin meaning “park keeper”