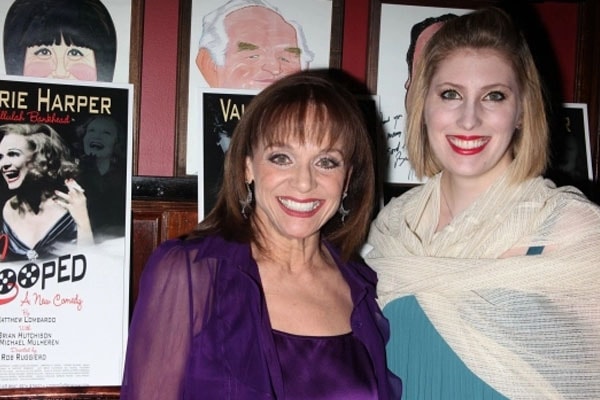 Cristina Harper is the adopted daughter of four-time Emmy winning actress, Valerie Harper, and producer/manager Tony Cacciotti. She was born in 1983. Moreover, she also has a half-brother, Michael Cacciotti, from her father’s former relationship.

Valerie Harper’s daughter Cristina Harper is currently working as an artist in Venice. And she also sells her work through an online platform.

Cristina Harper Is The Adopted Daughter Of Valerie And Tony

Valerie Harper’s Daughter, Cristina Cacciotti, is 36 years now. After marrying in 1987, Cristina’s parents adopted her.  Her mother, Valerie Harper, expressed in an interview that adopting Cristina had been the best thing ever.

Following in the footsteps of her mother, Cristina Cacciotti also played a small role in the “Zoochosis Presents: Hooey”, and performed 2 episodes on “That 70’s Show”. Valerie Harper’s Daughter, Cristina, even appeared on “The Talk” in 2010. However, Cristina didn’t pursue acting any further.

Meanwhile, Cristina is working as an artist in Venice. Furthermore, she too has opened an Instagram account that is solely dedicated to exhibiting her art-works. From her account, we can discern that Cristina is a very passionate artist. She even sells her spectacular works on Etsy.

In her Twitter bio, Cristina has described herself as an ‘Actor, writer, dog lover.’ She is also the host of   #horrormovieswithtwitterfriends. On Cristina’s Instagram page, she frequently posts about her two pet dogs, one of which has also his own Instagram account as well. Cristina Cacciotti also is in a romantic relationship with a man whose identity she hasn’t disclosed yet.

How Did Cristina Cacciotti’s Parents Meet?

Cristina’s parents Valerie Harper and Tony Cacciotti married on April 8 in 1987. Her mother Valerie Harper is an established American actress who began her career as a dancer on Broadway. As for her father, Tony Cacciotti is a producer and an actor. He is known for “My Mom and the Girl”, which aired in 2016. The pair of Valerie and Tony met on the set of “Chapter Two” and fell in love. Besides, Cristina’s father Tony is a two-time divorcee and is affirmed to be a father of four. Out of the four children, details of only one is known. Tony’s son as well as Cristina’s sibling Michael Cacciotti, was a 2012 Democratic candidate for District 41 of the California State Assembly.

The name Cristina is an Italian baby name which means ‘Follower of Christ’.