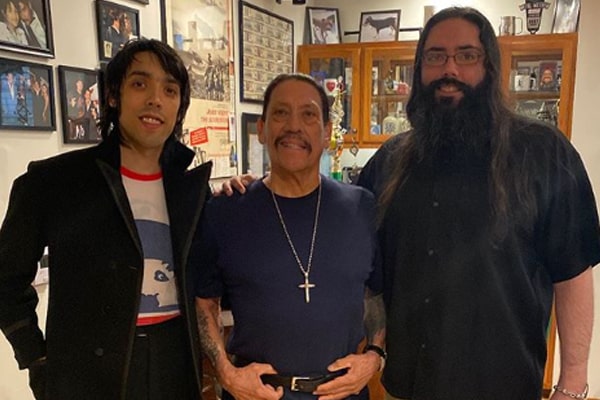 Danny Trejo is an American actor known for his work in several Hollywood films, including Heat, Con Air, Desperado, etc. He has also appeared in T.V. shows such as Breaking Bad, The X-Files, The Flash, and Sons of Anarchy.

Danny Trejo is a famous face in Hollywood. However, his eldest son, Danny Boy Trejo, is nowhere near the public eye. Born in 1981, Danny Boy Trejo has remained with mum about his existence and is leading a secretive life.

Furthermore, in an interview with Prison Legal News in 2011, actor Danny Trejo revealed that his son lived in Lompoc because his mother’s hepatitis C is real bad. He further added that he is a proud father, and it is a real compliment for him that his children care about his mother.

Despite being a son of a massive Hollywood star, Danny Boy did not follow his father’s footsteps. However, the father-son trio was seen in few events.

Although Danny Trejo has kept himself grounded for several years, his Instagram account is public. However, the account does not shed any light on Trejo’s career.

Going through Danny Boy Trejo’s Instagram, Trejo seems to have a massive soft spot for dogs. He shares a handful of dog’s pictures on his Instagram account, which has comparably fewer followers than his siblings and famous father.

Regardless of his big build, beard, and intimidating body, Danny Trejo’s son, Danny Boy Trejo, seems to a huge softie. Furthermore, he loves his father and posts about him occasionally. To keep it straight, Trejo is a massive fan of his dog, dad, siblings, and spiderman.

In the world that is consumed by the Internet and social media, Danny Trejo’s son is living in the moment, leading life privately and enjoying it to the fullest.

We all know about Danny Boy Trejo’s father and his considerable contribution to Hollywood. However, Trejo’s mother is as grounded and him and is unknown to the world.

Similarly, Danny Trejo was married to Debbie Shreve in1997. But the couple divorced in 2017. Aforementioned, the former couple gave birth to two talented people, Gilbert Trejo and Danielle Trejo.

However, after having two children, Danny and Debbie parted ways after 12 years of the union in 2009. Interestingly, the couple finalized their divorce in 2017.

Also, the Machete star, Danny Trejo cherishes his family. For that matter, he received the Moderna vaccine and advised the ‘tough guys’ in his neighborhood to take the shot for the sake of their family.

Danny Trejo got his first COVID-19 vaccine during a live event at USC along with NBA Hall of Famer, Magic Johnson, and actor Arsenio Hall.

Unlike Danny Boy Trejo, his sibling, Gilbert Trejo, has followed his father’s footsteps into Hollywood. Seven years younger than Danny Boy, Trejo is very hardworking and is actively working as an actor and a director.

According to Gilbert Trejo’s IMDb, his movie credits includes Machete, Skinny Dip, From A Son, etc. Likewise, Danny Boy Trejo’s sister seems to be a rowdy woman with a colorful personality. Garnering almost 10,000 followers on Instagram, she is actively vocal about the ongoing issues in the society.

The Trejo siblings seem to be present in one another’s life events and share a close bond. Let’s hope we get to hear more from Danny Trejo’s son, Danny Boy Trejo, in the future. Well, his other brother Jose Trejo and sister Esmeralda Trejo are also a person of secrecy.

Danny means ‘God Is My Judge’ originated from Hebrew.