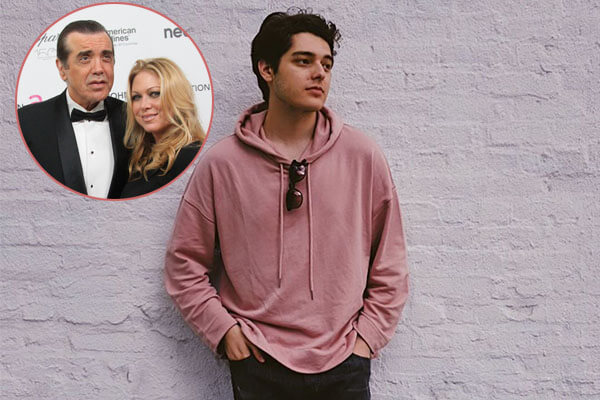 Chazz Palminteri‘s son Dante Palminteri is an American actor and singer-songwriter, famous for his single, Miles Apart. Dante was born in New York on October 11, 1995, to Chazz’s wife, Gianna Ranaudo. He has a sister, Gabriella Rose Palminteri.

Dante Lorenzo Palminteri is a singer, songwriter, and actor. He spent his childhood in Los Angeles, and while still in school, he set up his first band, ‘MIGRAINE’ with fellow classmates. He made his movie debut in Noel (2004) and starred in Sharknado 2. Moving towards his relationship, Dante Palminteri’s girlfriend and dating partner is Chloe Brake.

Chazz Palminteri’s Son Dante Palminteri Is An Actor And Singer

At a young age, Chazz and the beautiful Gianna’s son Dante made his on-screen appearance. He first starred in his father Chazz’s 2004 movie Noel. From there, Dante got a number of roles in other films and gave notable on-screen performances. Further, he starred in The Obscure Brother (2010) and received critical praise for his acting.

From an early age, Dante dreamt of forming his own band and making music. Through his school band ‘MIGRAINE’, he performed shows at nightclubs in New York, such as The Bitter End and Crash Mansion. Since then, the actor turned pop singer-songwriter has dropped a lot of EPs and singles. His latest single, Miles Apart, is well-received on YouTube.

Going forward, Dante’s love for music and singing grew as he matured. He is a multi-instrumentalist and can play the guitar, piano, bass, and drums. In an interview, Dante regards music legend John Mayer as his major influence. Dante’s parents must be really proud of their only son. Surely, his soothing voice is destined to reach millions of fans worldwide.

The good-looking young man, Dante Palminteri is in a romantic relationship with his girlfriend, Chloe Brake. Going through their social media, it seems the lovebirds are really into each other. In one of her Instagram posts, as Chloe herself puts it, they “look like they just walked out of an Italian crime series.”

In a parallel universe, Dante would surely make a dashing Italian mafia boss. For now, he is happy writing songs and selling them for a living. On his Spotify, Dante has published three singles, namely Miles Apart, From Me To You, and Beautiful. Going by the lyrics of his songs, we can assume that Dante dedicates some of his songs to his girlfriend, Chloe, who works as a marketing manager at a record company. In the future, the young couple might have plans to get engaged or tie the knot.

The name Dante comes from Italian, which means “famous bearer.”