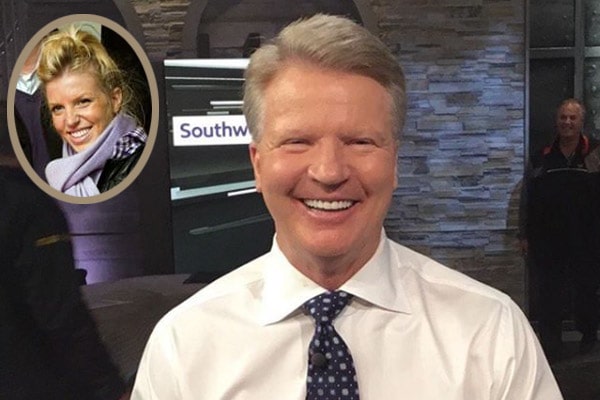 Phil Simms, born Phillip Martin Simms, is an American former football quarterback. Simms spent his entire fifteen years of a professional career playing for the New York Giants of the NFL. He earned the title Most Valuable Player (MVP) of Super Bowl XXI after leading his team to a 39-20 beating the Denver Broncos. Also, Simms was named to the Pro Bowl for his great performances in the 1985 and 1993 seasons. Currently, Phil Simms works for the CBS network as a sports commentator.

Talking about the personal life of Phil Simms, he is married to Dianna Simms. Phil is a father to three children with his wife, Dianna. Here, meet one of Phil Simms’ children, Deirdre Simms, and indulge yourself in some of her unknown facts which you might be interested in.

The two time Super Bowl-winning quarterback, Phil Simms, took the wedding vows with Dianna Fornfield on 23 February 1980. Since then, the husband-wife duo is living a contented life together in Franklin Lakes, New Jersey.

Phil and Dianna are parents to three talented kids, a daughter Deirdre Simms and two sons Chris Simms and Matt Simms. The oldest of three Simms’ children, Chris Simms, was born on 29 August 1980. Growing up, he followed his father’s footsteps in the sports industry. Chris is the former American football quarterback who played for the Tampa Bay Buccaneers. After retiring from playing career, Phil Simms’ oldest son, Chris, works as a sportscaster for NBC.

Furthermore, the Simms couple, Phil and Dianna, welcomed their second son, Matt Simms, on 27 September 1988. He is also in American sports like his father and brother. Matt is an American football quarterback playing for Atlanta Falcons and is currently a free agent.

Similarly, the youngest offspring of Phil Simms, Deirdre Simms, added to the family some years after Matt’s birth. She completed her high school from the Ramapo High School. Formerly, Deirdre worked as a sales associate at a fashion boutique in town. However, it is unknown if she is continuing the same old job or engaged in any other professions in the present.

Phil Simms’ daughter, Deirdre, is not an American sports player like her father and older brothers. However, she is not away from the sports field, either. On 19 July 2014, Deirdre tied her marital knot with a star linebacker at Boston College, Brian Toal. Her husband is also the winner of two championships in the UFL.

Deirdre and Brian’s marriage ceremony took place at the Church of St. Elizabeth of Hungary in Wyckoff, New Jersey. The newly-weds celebrated their wedding reception in the backyard of Deirdre Simms’ father’s Franklin Lakes home.

On the reception party, Phil Simms’ little princess, Deirdre, was in an ivory-colored wedding gown and matching veil, designed by Oscar de la Renta. Similarly, one of the two New York bands, Banda Magda, played a blend of French and Brazilian songs for their cocktail hour.

The New York Times reported that 215 guests attended the marriage ceremony of Deirdre and Brian. Singer Adam Bastien, and the band leader of Radio Underground, Mike Latham, were also there.

Deirdre Simms’ husband Is A Close Friend Of Her Brother

Though Deirdre and her spouse, Brian, grew up in the same circle, she looked at him as her brother’s friend. However, it was not the same with Brian. He always paid particular attention to Deirdre. Although Deirdre was not aware of Brian’s interest in her, her mother often noticed Brian staring at her.

After graduating from high school, Brian focused on his goal of playing football professionally. So, he did not get to see Deirdre for almost two years. Later, when Brian visited his high school teammate, Matt, after two long years, he asked the number of Deirdre. After that, the two began talking and meeting each other often. And the two were soon dating. However, Deirdre and Brian decided to marry only after Brian gets settled and get a job.

The beautiful couple was definitely meant to be together. Deirdre waited for her love until he got settled and married only when he got a job. Currently, Brian is the Vice-president at BTIG, a global financial services firm.

As for the photos of Phil Simms’ daughter, Deirdre Simms, she does not seem to prefer public attention. So, her presence in social networking handles is low. Despite having social media accounts, she has kept it on private, Nevertheless,  Deirdre is living a healthy life with her beloved husband entirely away from the unnecessary media dramas.

The Irish origin name Deirdre means she who chatters.