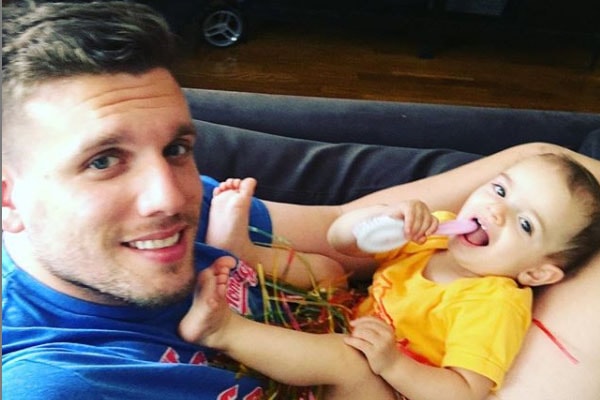 The well-known comedian and actor, Chris Distefano, welcomed his baby girl Delilah DiStefano with wife, Jazzy DiStefano, on May 20, 2015. His fans and well-wisher’s got the first glimpse of his adorable daughter when Chris uploaded her picture on his Instagram account.

Since it was the first child of the couple, the pair of Chris DiStefano and Jazzy DiStefano were delighted to welcome a new member to their small family.

It just seems like yesterday that Delilah was welcomed to the world, but she is nearly 4 years old now, and as adorable as ever! Chris has flooded his IG with the videos and posts and stories of his daughter.  The Father-Daughter duo is effortlessly cute and one can truly see how much love Chris has for his girl! It’s true, you don’t have to be born a princess for your father to make you feel like one!

The couple didn’t shy away from the spotlight and were very public about Jazzy’s pregnancy. Even before they tied the knot, Chris frequently uploaded pictures of his then-girlfriend Jazzy with her baby bump. The excited to-be father would often post pictures of his wife with darling captions, making his fans and followers once and for all realize that this man was not just an amazing comedian and an actor, but an equally amazing husband as well.

Chris and Jazzy met one another when Chris joined a Zumba class where his to-be wife was an instructor. Delilah Distefano’s parents Chris Distefano and Jazzy got married on February 13, 2015, at New York Church.

In the same year, Jazzy gave birth to their daughter, Delilah Distefano. Father Chris often uploads pictures of his daughter and at times wife in his Instagram account with adorable and sweet captions.

From the pictures that Chris posts, we can see that daughter Delilah bears a strikingly similar resemblance to her father.

The name Delilah is of Hebrew origin which means lovelorn or languishing.