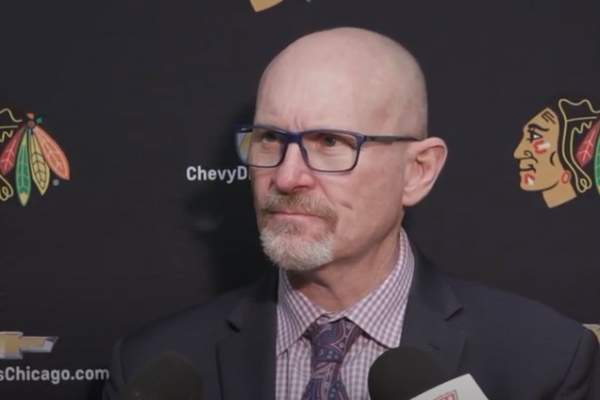 Derek King is a former Canadian professional ice hockey left winger who is currently the interim head coach for the Chicago Blackhawks of the NHL. As an athlete, he played 14 seasons in the NHL for numerous teams from 1986-87 to 1999-2000.

Aside from being an interim coach, the 55-year-old is a family man. He enjoys a blissful life with his wife and kids. However, many might not be aware of the fact and curious to know about his little ones. Therefore, in this article, we will learn more about Derek King’s children.

As the title suggests, the ice hockey coach is a doting father of three baby boys whom he shares with his spouse. But unfortunately, not much has been revealed about his partner. Alongside his oldest child, D.J. King, he has twin boys.

Despite Derek being in the limelight for a long time, he seems to prefer keeping his personal life private. There is a huge possibility that he wants to keep his family away from the public eye as much as possible.

DJ King was born on August 7, 2000, in Scottsdale, Arizona, as the eldest child of the former ice hockey player and his wife. Following in his father’s footsteps, DJ is also pursuing a career in hockey. He competes in the East Coast Hockey League as a Defense, who shoots left, for the Fort Wayne Komets.

Standing at the height of 6′ 3”, Derek King’s son has previously played in various leagues before signing with the Komets. For instance, he competed in one of the major junior ice hockey leagues, OHL, for three seasons. Also, he played the 2018-19 season for Hamilton Bulldogs and the 2019-2021 seasons for the Saginaw Spirit.

Derek King’s Other Sons Are Twins

While living in Arizona, the interim head coach and his spouse welcomed a set of twins into their family. Unfortunately, the name of the duo and their birth details have not been disclosed yet. However, as per an interview with NHL, Derek King’s twins were around two years old in 2009.

The boys are likely in their mid-teenage years now. Also, they have an age difference of nearly four or five years from their big brother. As per the coach’s Twitter bio, his kids also love the game of hockey. They sometimes go to the Rockford Hockey Club rink for practices or games. Could it be the twins are planning on becoming ice hockey players in the future?

Well, we will only know when the time comes. Hopefully, we will learn the names of the twins along with their other information soon in the days to come. Nonetheless, it seems that Derek King’s children are doing quite well. We wish the Kings a life full of happiness and prosperity in the future.

DJ King’s given name is of English origin that means “a believer of truth; high congenital capacity.”