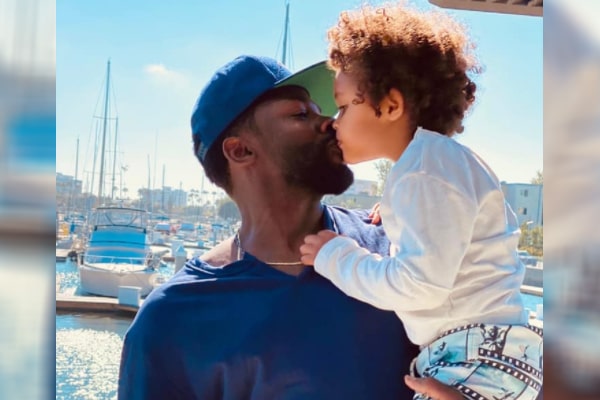 Besides being known for his acting career, Luke is a proud father as well. Empire actor, Luke has children with actress and singer wife, Sophia Adella Hernandez. The pair married in 1998 and has been enjoying a blissful marriage. Hence, let’s have a look at the fruits of the wedding.

Luke Is A Father Of One

The exact number of Derek Luke’s children is confusing since his IMDb claims only one child while there are plenty of sites that suggest that Derek has two children.

While People announced the pair’s first pregnancy in 2006, there was no news followed. However, the couple seems to have welcomed only one son in 2016 privately.

Derek Luke’s son makes frequent appearances in his social media handle. Regrettably, we do not know many details about his birth or even his name, but he learned several things as a kid. According to Luke’s Instagram, he is seen helping with chores and having fun with the family.

The family of three tags along and enjoys every little moment together from Valentine’s Day to Thanksgiving. Both parents and children teach one another. Thus, Derek Luke’s son is teaching new ways of life and vice versa.

Derek Luke’s Son Is Aware Of The Ongoing Issue

Moreover, Derek Luke’s wife, Sophia, published a heartwarming post about her son. Although Luke’s son is only four years old, he acknowledged the importance of his speech and approach during the BLM movement.

According to Sophia’s post, Derek and her only son requested to join the peaceful youth protest. Hence, they walked in unity and felt the most robust connection. She further mentioned that children were provided a safe place and use their voice about the historical moment.

The rampant shooting and injustice occurring against the black community are infuriating, and every child must learn and experience unity. Hence, Derek Luke and Sophia are doing great as parents.

Derek Luke Has Been Married Since 1998

Aforementioned, Glory Road star, Derek Luke married actress and singer, Sophia Adella Hernandez in 1998. The pair have been together for so long and have a fair share of memories.

Furthermore, Derek and Sophia’s unique relationship angered many. Since Derek is an Afro-American and Sophia is a Hispanic woman, the pair celebrated their differences while receiving numerous criticism. The golden couple had angered people because of their love.

However, Derek Luke defended the love of his life and silenced every critic with an open message. He said that the comments about his wife being of another race were irritating. Likewise, he wrote that he usually wouldn’t entertain others’ opinions but said it was 2015, and there shouldn’t be a problem to date outside your race.

Derek further clarified that everyone is entitled to their opinions, and hence, who one chooses to date is that person’s business. He ended his statement calling out the critics with a bold argument that read, ‘ Sophia is Hispanic, neither white not black nor Chinese. And she’s mine!!’ Well, that’s the energy everyone craves in a relationship anyway, which justifies their marriage is nothing but full of love and respect.

The pair welcomed a child and are living their best life. Ler’s hope Derek Luke’s son grows up to become one of the finest people and as sensible as he is today.