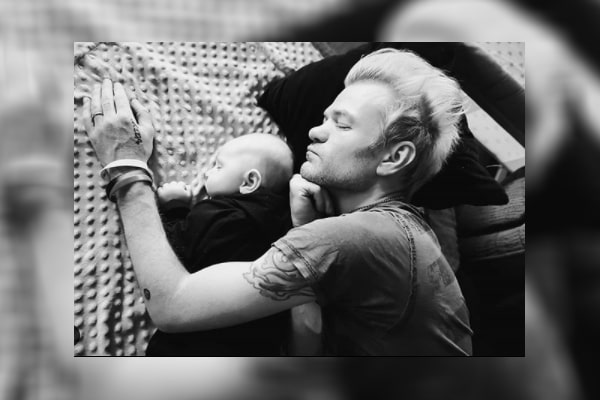 Deryck Whibley is a Canadian musician, singer-songwriter, and producer known as the rock band member of Sum 41. Whibley came a long way since 1993 and is known for his incredible talent.

Besides being a musician, he is a doting father and a loving husband as well. There is nothing more precious for a man than holding their beloved kid for the first time. Hence, we will be talking about Deryck Whibley’s overwhelming experience in this article. Let’s go.

Father For The First Time

The joy of holding a child for the first time is overwhelming with happiness and excitement. Such a case happened with singer/song-writer Deryck Whibley as he welcomed his first child in April 2020 with the wife of 5 years, Ariana Whibley.

Deryck Whibley announced the birth of his kid, Lydon Igby Whibley, via social media on March 2, 2020. Since then, Deryck Whibley’s son is a constant face on his Instagram. Likewise, Whibley’s wife, Ariana, posted a photo with an adorable caption, which was an appreciation post for the 40-year-old singer in a nutshell.

Well, Whibley’s son was famous even in his momma’s belly as she posted several pictures of herself. Moreover, Mrs. Whibley announced her pregnancy metaphorically via Instagram in August 2019.

Lydon seems to be very close to his parents at a young age and might grow up loving music like his father. Let’s hope for the best.

The Whibley couple; Deryck Whibley and Ariana Cooper walked down the aisle on August 30, 2015, after several years of dating in Los Angeles. The wedding ceremony was held at the five-star Hotel Bel-Air surrounded by friends and families. The violin play and mellow vibe tied the intimate ceremony.

Former Sum 41 frontman, Deryck Whibley’s wedding was grand and intimate, a complete opposite of one would imagine. Unfortunately, it was delayed after he suffered chronic liver failure after alcohol abuse.

Deryck stayed away from the spotlight after he collapsed in his kitchen in April 2014.

Anyway, the pair took their time and planned their baby. Hence, Deryck is entirely sober, happily married, and time gifted by the pandemic. Let’s hope Deryck Whibley’s marriage lasts, unlike his previous marriage.

Before marrying Ariana Cooper, Sum 41’s former frontman, Deryck, was married to the 90s star, Avril Lavigne. The former couple performed together and freely talked about their relationship in public.

Deryck and Avril were friends since she was 17 and started dating at 19. Furthermore, they decided to take grand steps and got married on July 15, 2006, at a private estate in Montecito, California.

Unfortunately, the marriage lasted briefly, and the pair got divorced on November 16, 2010, after a little more than three years. The former couple does not share children together.

Lydon has an English origin which means  Descendent Of Lodan.