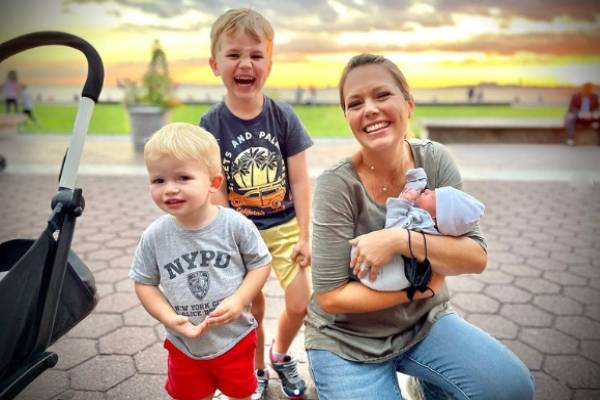 Dylan Dreyer is a doting mother of three sons, whom she shares with her husband, Brian Fichera. Image Source: Dylan Dreyer Instagram.

The television personality is married to Brian Fichera and has been together since they started dating back in the 2000s. The adorable duo got hitched in 2012 and now has three children together: all of them being sons. Even though the Dreyer-Fichera couple regularly shares about their kids on Instagram, there must be a lot of curiosity surrounding the boys.

Here are some interesting facts about Dylan Dreyer’s children. Let’s see how they are growing up.

Cal Is A Natural In Front of Camera

Dylan Dreyer is a well-known face on the Today show, and she balances her demanding television career effortlessly with three young children. Calvin Bradley Fichera is the first child born to Brian and Dylan on December 17, 2016. The baby weighed 8 pounds, 3 ounces, and was born via C-section. Regardless of all pain and hardships, his parents must have been delighted to hold their precious firstborn.

As Calvin is being raised by parents who work in the broadcasting world, he seems to be a natural in front of cameras. The cheerful boy often joins his mother on the Today All Day talk show and his genuine energy fills up the screen. Furthermore, the show has a fun cooking segment named Dylan Dishes: Cooking with Cal where he attempts to cook amazing recipes with his mom in the kitchen of their New York apartment.

The 5-year-old Calvin is the eldest of three Fichera siblings and started kindergarten last year. Dylan’s son enjoys dancing, watching movies, golfing, cooking, and many other activities on his day off.

The kid must be talented to have so many interests at a young age. Well, the eldest of Dylan Dreyer’s children seems to be a fun-loving charming boy who adores his younger brothers.

Talking about health issues, Cal’s mother is said to have had suffered from secondary infertility. It had been reported that Dylan Dreyer even had a miscarriage in early 2019 before her prenatal period. She must have had a hard time overcoming the loss of an unborn child.

On the NBC morning show, the mother of three spoke openly about the heartbreaking incident. She admitted being upset that she had to go to work, acting like nothing was wrong.

Despite all the complications, the television meteorologist gave birth to her second child Oliver George Fichera in early 2020 after receiving proper treatment for her condition. It may be accurate to say that Ollie arrived as a reward for his mother’s hardships.

Also Read: Meet All Of Hubert Davis’ Children Have Grown Up And Their Whereabouts

The Youngest One Is A Miracle

The Dryer-Fichera couple often expresses the joy of having kids and revealed they were trying for a third child after Ollie. As they were about to give up after some time, Dylan’s pregnancy with baby no.3 came as a huge surprise.

Brian and Dylan welcomed their third child, Russell James Fichera in September 2021, weeks prior to the due date. The youngest of Dylan Dreyer’s children had to stay in NICU for several days before finally coming home from the hospital and joining brothers Calvin and Oliver in the family.

The latest addition to the Fichera family must be nothing less than a miracle. The mother of three says she feels complete after the birth of her youngest child Rusty.

Well, seeing as they are born to a famous parent, the Fichera boys can be seen on Dylan and Brian’s Instagram often. The proud parents frequently share pictures and videos of the little ones on their social media and receive a lot of love and attention from fans.

The family of five is often seen spending outings and vacations despite the parents’ busy schedules. Moreover, the parents of three must cherish their sons as they frequently express gratitude towards each and every well-wisher, blessings, love, and adoration for the boys.

Not only this, but Dylan Dreyer’s three boys are a huge inspiration for her. The successful meteorologist has written a children’s picture book series named Misty The Cloud: A Very Stormy Day. The talented author blends her broad weather expertise with her experience as a mother in the book. The Fichera brothers might have been a good source of inspiration for their mother to write such books.

Dylan’s children are growing up well surrounded by their parents’ love and affection. We wish them good health and happiness in the upcoming days.

Calvin is a slightly quirky but cozy name of French origin which means Little Bald One. While Bradley is of Old English origin that means Broad Meadow.

The French name Russell means Red Haired and the Hebrew name James means Yahweh May Protect. Here, Yahweh is the state god of the ancient Kingdom of Israel.