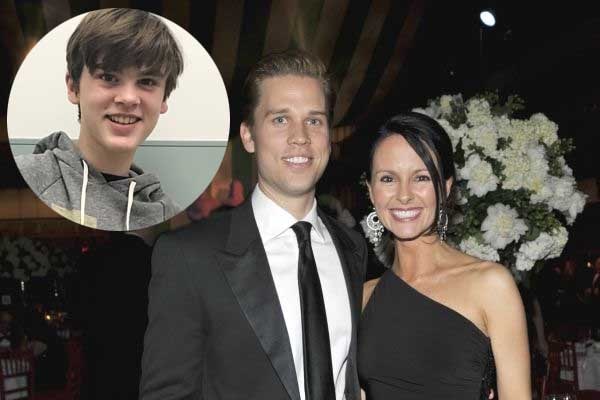 Born on August 1, 2003, Dylan Rafferty Brown is the son of Victoria Arbiter, the Royal Commentator, and actor Ryan Brown. The couple tied their knot back on the 15th of December 2001 and are still going strong to date.

Dylan Brown’s mother Victoria is not only a royal commentator but also an author of Queen Elizabeth II for Pocket Giants & Royal Columnist. She loves spending time with her husband and her only son. Yes, despite being married for nearly two decades, the pair shares only one child. So, today we will learn more about the only son of the royal commentator Victoria and her husband Ryan Brown.

A Lovely Family Of Three

Being a royal commentator is not an easy task, and if you have a child of your own, then it becomes even tough to handle. Victoria is a similar case when she became the royal commentator of the royal family of Britain, she had a small son to look after. At that time, her husband, Ryan, came to her rescue and showed how much of a supportive partner he can be. While Victoria was away doing her job, her husband was the one who was looking after their son Dylan.

April 29th, 2011 I was having a ball with the incomparable @EricaRHill while my son was rabble-rousing on Horseguard’s Parade! 😀 pic.twitter.com/l5d8PubSjm

Apart from that, whenever Victoria has time, she tries to spend it with her family. Whenever she is home, not doing her job, she is busy with her son and husband. When Victoria Arbiter’s son was just a small boy, she used to take him to his football matches. The family of three usually goes to Zimbabwe to enjoy their vacation. Dylan’s mom also happens to be a huge Hugh Jackman‘s fan, so when she finally got the opportunity to meet him, she took her son along with her.

Victoria Arbiter’s son Dylan Rafferty Brown is really into aviation. He says when he grows up, he wants to become a pilot. When Dylan was about five years old, his mother took him to get his book signed by the Tuskegee Airmen. Victoria recalls her son had a thrilling experience.

Moving on, an interesting fact regarding Victoria’s son is that he enjoys watching the Queen’s Christmas Day message. He also loves dressing like the character Marty McFly from the movie Back To The Future. We can see he is a big fan of the Sci-Fi genre. His interest in aviation also points toward the same thing. Whereas according to Victoria’s tweet, her son is taking his first flying lessons.

The mother-son duo was also spotted paying their respect to Victoria’s granny on January 27, 2017, hashtagging We Remember. Moving on, when we talk about Victoria’s son Dylan we can never exclude dad Ryan, as both the father-son duo share quite a spectacular bond with one another. Dyan has inherited his father’s good looks and his mother’s charming nature.

Ryan Brown’s son, Dylan Brown’s name, is of Welsh origin, meaning son of the sea, son of the wave, or born from the ocean.